This article originally appeared on AskGrowers and has been reposted with permission.

The world of cannabis has never been changing at such a rapid pace. Whereas most casual users once thought of pot as a singular entity capable of curing the general ailment of the moment, cannabis has now turned into a daunting world of strain/varietal/cultivar choices at commercial dispensaries.

Sure, the buzz among the cannabis community may inform you of the new and popular choices. Perhaps a friend has even plugged you in to choosing cannabis based on Sativa and Indica amounts. But with anywhere from Medical News Today estimating over 700 unique cannabis varieties to the AskGrowers Strain Database cataloging 4700+ different species, one must wonder how consumers are deciding to make their cannabis choices.

Is it based on THC or CBD percentage? Do Indica and Sativa percentages determine daytime from nighttime use? Is it just trial and error to discover a few varieties that work for you and are available in your area? What are terpenes in weed?

In every case, there is a lack of good advice and research available to the common cannabis consumer that needs a demarcation from these misinformed, old-school strain selection methods. The time has come for a new perspective, one that breaks down barriers and places the curative power of cannabis into all consumers’ hands. Welcome to Terpenology 101!

A 21-year-old walks into a recreational dispensary for the first time. They are presented with a varied selection of weed to choose from. The names are included with the amounts of THC and CBD, but they only vary by a few percentages. The budtender explains which strains they like and may have an opinion of which ones work well for activity and others for relaxing. The consumer now begins the arduous process of finding the varieties they enjoy best by returning to the dispensary numerous times in a hunt for “the perfect bud.”

A 65-year-old has just retired and thinks to themselves, “I tried marijuana a few times when I was younger. I don’t need to worry about the personal or professional consequences of a little experimenting. People say CBD is good for you. I think I’ll try some!” The consumer walks into the closest dispensary and says they are looking for some CBD pot. They are presented with a bevy of edibles, candies, lotions, sodas, and tinctures that are easy on their respiratory system. Only THC and CBD are known in the products, and the experience isn’t really how they remembered it anyway. Hopefully, the budtender explained the dosage amounts and the level of experience required for different products!

Or, in my case, a middle-aged US Army veteran receives a Colorado red card to treat chronic PTSD. The doctor provides access to medical cannabis with no instructions on how to use it. A little internet research alludes to many cannabis varieties that are said to treat my symptoms. And my local dispensary even has one! It helps me sleep some, but during the day, it frequently isn’t suited for my environment. How can this be a sustainable treatment plan? I’ll just have to keep at it and hope a clear medical strategy presents itself.

How do cannabis consumers overcome these challenges in one of the fastest growing industries worldwide? Do we even need to think about it that much? I mean, it gets you high, right? Isn’t that the point of it all? Sure, it can be! But there are few differences that really separate recreational from medical users. We are all trying to treat something when we choose marijuana. Becoming informed on how to target that purpose is a tangled web of long-term experience that never really comes with clarity or guidance. There is a better way. A way to make a new wave of first-time patients more informed than we were. Terpenology is here to fill the cannabis knowledge gap about terpenes meaning once and for all!

So, what are terpenes? The terpenes definition is of highly aromatic compounds that determine the smell of many plants and herbs, including cannabis. These lovely molecules occur throughout nature, where over 20,000 terpenes are known. They are rich in herbs and spices, such as cloves and thyme, and in fruits, such as oranges and mangos. The dietary significance of terpenes is vast and will be explored later in our Terpenology series of posts.

In this article, we’ll focus on the proposed psychotropic influence of the 8 Super Terpene Classes. The weed community will tell you the mass terpenes that you can find below are responsible for the taste and smell of your cannabis. Some even say that it appears terpenes have something to do with marijuana highs. We all seem to be waiting around for someone else to tell us how these little naturally occurring molecules in our cannabis really matter. There are over 200 weed terpenes in cannabis Sativa alone. Only 8 have a current effect on the entire market. The next great era in the history of marijuana has begun. We are only on the cusp of Terpenology potential. 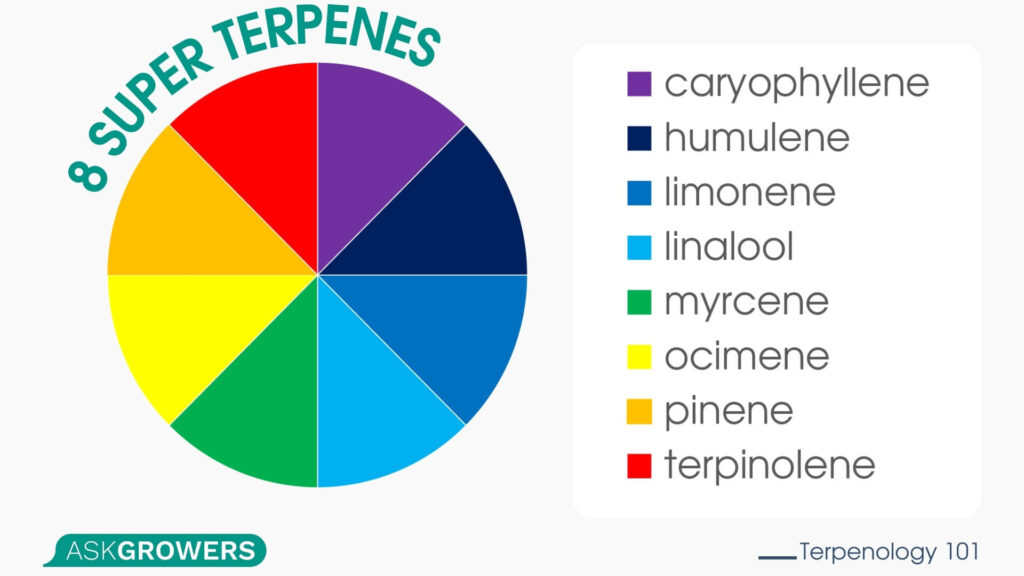 Terpenes are responsible for creating specific marijuana experiences that are being identified in both the cannabis and scientific communities alike. Consumer experiences, cataloged in numerous cultivar internet databases, correlate to strains and, thus, specific terpene combinations. Even US government research is providing proof on ending terpene profiling speculation.

Together, these data will create the foundation of revolutionary cannabis education. It is imperative for growers, consumers, and businesses alike to prepare for the post-schedule-1 US era of medical research now. Weed is heading to new highs by defining the divine trinity of THC/CBD, Sativa/Indica, AND terpene profiling to create the greatest cultivated community of all time.

Correlation Does Not Prove Causation

This is a common certainty in science. Showing the relationship between two sets of variables does not mean that one causes the other. Thus, the cannabis community cannot state that the cause of reported consumer experiences is from the effect of terpenes. But we have observed it, which is important! How do we know that terpenes in weed are creating specific highs?

If I tell you that limonene causes euphoria, would that bias your experience of Lemon Kush? Science establishes causation by saying, “these things happen in this order.” Additionally, that order is predictable and repeatable with few or no outside influences. So, let’s see if science has some answers to establishing why thousands of cannabis varieties all have unique experiences among their users. 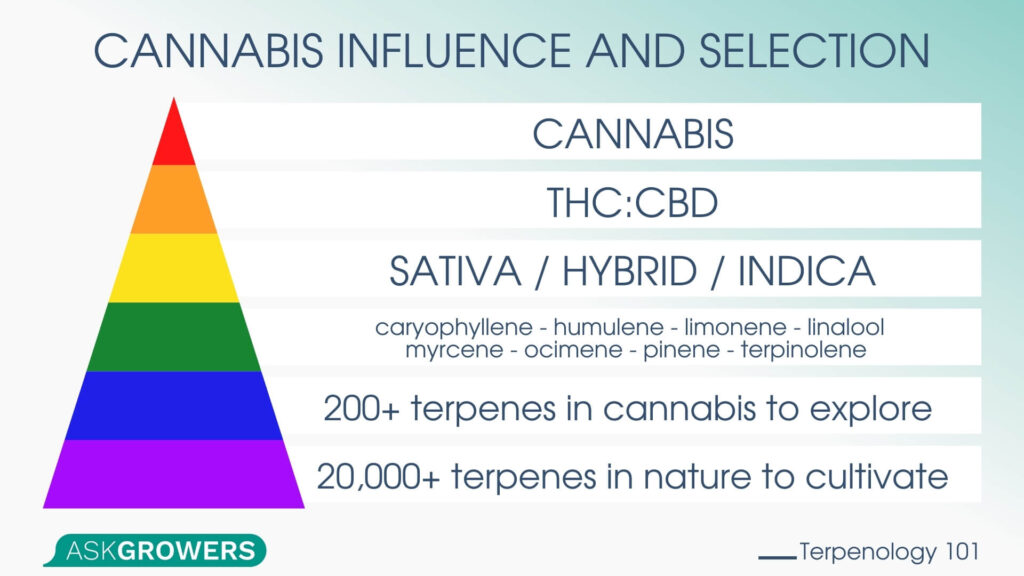 The subject of cannabis’ psychotropic influence began in 1964 when Israeli chemists Raphael Mechoulam and Yehiel Gaoni discovered tetrahydrocannabinol (THC) is the plant’s active component. Later dubbed the “father of cannabis research,” Mechoulam’s observations in Isolation, Structure, and Partial Synthesis of an Active Constituent of Hashish led to the discovery of the endocannabinoid system (ECS), where cannabis disrupts selective brain functions.

Specific receptors in the ECS, CB1, and CB2 (CB=cannabinoid), are where the merging of stoners and science was first born. The gap has never been as narrow between these two as it is today, and Terpenology is the rope bridge to our full understanding of cannabis.

How Terpenes Affect Our Minds

The 2008 study Beta-caryophyllene is a dietary cannabinoid (Gertsch, et al.) has become the basis of an investigation into how terpenes affect our minds. Herein, beta-caryophyllene, the most dominant cannabis terpene, was proven to bind along with THC to our CB2 receptors.

Given that caryophyllene is abundant in nature outside of cannabis, this was particularly useful in connecting dietary terpene information and natural sciences into a shadowed world of US schedule-1 research bans. From this spawned a litany of further studies intent on discovering exactly how terpenes could be another active marijuana component and how those in nature affect the brain outside of this mysterious plant.

Three years later, Ethan Russo (2011) published his findings in Taming THC: potential cannabis synergy and phytocannabinoid-terpenoid entourage effects. Many specific observations were made relative to specific terpene physiological effects on brain receptors far and wide outside of CB1/CB2. Among many insightful revelations in this study, principally noted are:

Russo followed up with Mark Lewis and Kevin Smith (2018) to further his observations on cannabis terpenes profiling in Pharmacological Foundations of Cannabis Chemovars. This study is one that every cannabis consumer can pull something meaningful out of for their marijuana choices.

Dissenting research material, perhaps expressed most profoundly in a 2020 study called Terpenoids From Cannabis Do Not Mediate an Entourage Effect by Acting at Cannabinoid Receptors, actually opens the door even further towards a terpene profile based cannabis approach. The obsession with the 2008 study focused on CB2 receptor binding is still prevalent here as researchers focused only on whether the 8 super cannabis derived terpenes significantly boosted terpenes THC effects in the known endocannabinoid system (ECS.) 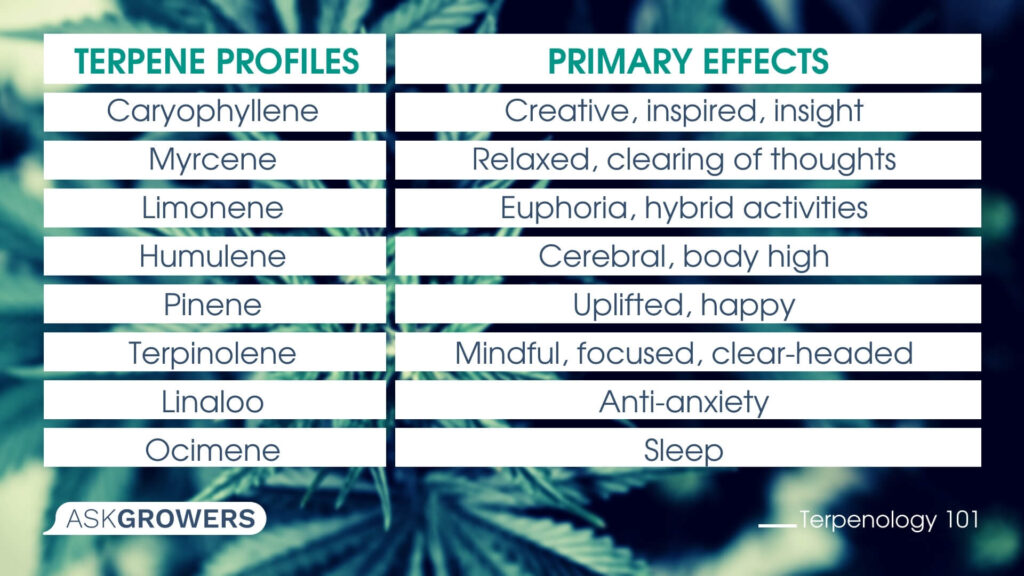 However, the same study states that cannabis terpenes binding ability is likely occurring outside of just the CB1/CB2 receptors. The study concludes there are low or negligible changes in these primary receptors. However, those observations are swept aside, even when the earlier Russo study concluded that these “negligible” levels do change behavior in mice.

Nonetheless, Terpenology deserves a critical review, and the weed community should come together to challenge it and make this a most legitimate cannabis experience causation.

The evidence is clear to me. Terpene profiling opens the most extensive possibilities in the cannabis industry. Growers have a vast new universe of terpene-specific cultivation to explore and colonize. Businesses have an entirely new model for organizing their strategy around while educating and attracting customers.

Imagine it with me! As a consumer, you enter a dispensary, and rather than a crude counter full of “this is what we’ve got,” you see varieties categorized with “Daytime Happiness – outdoor activity,” “Relaxed but Mindful – movie or game night,” “High mental activity – demanding work,” “Just the zzz’s – sleepy time varieties.”

Picture an in-house cannabis physician or sommelier explaining to you the subtle differences of their selections, custom tailoring your experience every time you walk in. We can finally fit the entire experience of marijuana into the limited walls of our burgeoning community and apothecaries. And outside those walls, we can now brave an entirely new world of dietary and lifestyle choices into our cannabis education.

Follow this Terpenology evolution together with AskGrowers.com, as we create consumer guides of all experience levels, promote healthy cannabis living and wellness, and continually incorporate practical science developments to ever narrow the gap between what was once an illicit trade into a fully recognized personal and medical solution destined for legalization across the globe.

Terpenology will be your guide in the unexplored wilderness where scientists are looking at stoners and saying, “Hey… you may have been on to something here…”

Medical News Today. (n.d..) What are the most popular strains of cannabis? Retrieved September 25, 2021, from http://www.medicalnewstoday.com/articles/marijuana-strains#what-are-marijuana-strains

Robertson, K. (2021, May 20.) Cannabis terpenes: What they are and how they work. Healthline. Retrieved September 26, 2021, from http://www.healthline.com/health/cannabis-terpenes#what-they-are.