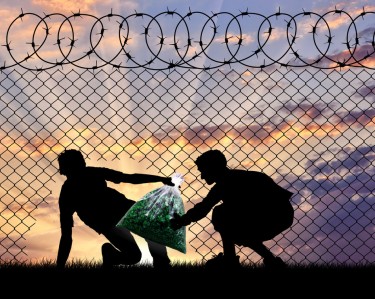 In the last ten months, customs officials and other agents operating at Michigan, United States of America – Ontario, Canada border have seized over 14,000 pounds of pot.

In 2018, less than 3,000 pounds of cannabis were seized at the same border. This indicates that the recent incidents are five times more than what was confiscated merely three years ago. The size of the shipments is growing each month. Makes one wonder what amount of cannabis is sifting through the borders without the authorities’ knowledge. For 14,000 pounds of pot to be seized at the Michigan border, how many pounds of pot made its way across.

History of Cannabis Seizures At The U.S. Borders

About 12 – 18 years back, the largest marijuana shipment that could be caught being smuggled into the U.S would have ranged from 60 to 100 pounds. Now, it’s all a different case. Smugglers now transport contrabands in thousands of pounds.

Reports obtained in recent months show that smuggling of cannabis is not just rampant in the northern borders, but everywhere. Officials at the Canada-U.S borders on Buffalo, New York have also confiscated over 40,000 pounds of cannabis from January to September 2021. In 2016, the figure was hovering a little bit at about 1,000 pounds.

In 2016, cannabis seizures were more rampant at the southern borders. These borders used to serve as the conventional route for marijuana into the U.S.. About 730,000 pounds in total were seized at southern checkpoints in 2016, but this year, less than 200,000 pounds have been confiscated.

Ontario and Michigan are cannabis legal states. Why Smuggle?

The two states are linked by the Detroit River. Canada has federal cannabis legislation, whereas the United States does not. However, Michigan is a cannabis legal state. This means that both states have legislation to back the cultivation of cannabis within their borders.

The concept of these types of borders is just fascinating at times. You can be in Michigan and just a gaze across the waters will show you the developing parts of Ontario.

At night, you can see the glows of the cannabis greenhouses situated just a few distances in rural Ontario. These greenhouses are the cultivation sites for massive amounts of cannabis in Canada.

Homeland Security reported that all seized cannabis was intended to be transported to areas very far away from Ontario or Michigan. The lake was the main reason the plants were being passed through these borders.

According to the report, most of the confiscated products were being moved to the south where cannabis legislation is non-existent. States like Carolina, Tennessee, and Georgia are usually supplied smuggled drugs from Ontario, Canada.

The same can be observed for cannabis being smuggled from the southern borders, once crossed, these products are usually transported to the opposite ends of the country. This is the only way black market operators can maximize their profits. Brian McNeal, the appointed spokesperson of the field division of Detroit’s branch of the DEA, said that logic points that none of the drugs smuggled via the Ontario – Michigan route is meant for residents in Michigan.

Moving Weed From Ontario to Canada

To transport these contrabands from Canada, smugglers make use of their cars, large vehicles such as trucks, and some even go as far as using a mini-submarine to evade the customs and border officials situated at the borderline.

Sometime in mid-2020, a Canadian man named Glen R. Mousseau was caught trying to smuggle in 256 pounds of marijuana using a personal submarine popularly called a Seabob. Mousseau was seen unconscious somewhere on the Detroit River, some suspect that he might have made his way in if he had not lost consciousness.

This arrest depicted that cannabis black market operators could go to any length to snuggle their products in and out of a country or state. These smugglers are attuned to innovative technologies and have developed highly sophisticated vessels to transport their products. Luckily, the border officials are also making use of innovative technologies to detect movement via these routes.

Mathew Stentz, an assistant special agent at Homeland Security Investigations commented during that period that all smugglers care about making a profit.

Canadian smugglers are targeting the states in the U.S that have no cannabis legislation because many legal areas have saturated markets. The only places where profits can be fully maximized with the potent greenhouse products are in States whose residents are desperate and in need of cannabis products. Profits in these states are influenced by supply and demand due to the legal unavailability of the drug.

Bring Cannabis In and Take Cash Out

The best way to understand smuggling is that for every pound of cannabis brought into the country, an amount of cash will be smuggled out after. It’s all an illegal bi-directional chain of smuggling. Not only cash is gotten in return for cannabis, some take out guns and other prohibited drugs (cocaine, methamphetamine).

Officer Stentz added that law enforcement agents in Canada and the U.S have teamed up to attack the high rate of smuggling done by criminal organizations. He said that the smugglers often pick up cash and cocaine while heading back to base.

Before the time Mosseau was arrested in mid-2020, he had previously been arrested in May for trying to smuggle thousands of dollars in cash into Canada. After his arrest, he pleaded guilty to being a part of a criminal organization that smuggled contraband and currencies from Canada to the US and vice versa.

Most times the persons found moving these drugs are not the real culprits. The goal of the security bodies involved is to be able to link these defendants to the real targets. The real targets, in this case, are large criminal networks that employ people like Mousseau to do their dirty work. These cases will likely stop when the U.S finally approves nationwide legislation for cannabis use. Only then will smugglers find it less appealing to move contrabands into the country.

3 RULES FOR SMUGGLING WEED OVER THE BORDER, READ THIS! 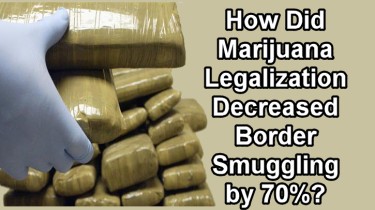 HOW LEGALIZATION HAS DROPPED MARIJUAAN SMUGGLING BY 70%