In recent news, a man convicted of life imprisonment based on cannabis possession had lost his appeal in the Mississippi Supreme Court. The state’s highest court, on the 16th of June 2022, decreed that Allen Russell’s sentence of life imprisonment does not violate the  Eighth Amendment. The Judge ruled that the initial sentence is in fact in line with the statute of Mississippi.

After being found guilty of cannabis possession totaling 43.71 grams, Russell was sentenced to life imprisonment without parole in 2019. Normally, the typical conviction would have been a three-year jail time but Russell was convicted of a higher sentence under the habitual offender statutes of Mississippi.

In times past, Russell had been convicted of two independent charges of a felon in possession of a gun and one house burglary. Under the state’s capital offender law, the judge was compelled to sentence Russell to life imprisonment given it is his third strike.

Russell had initially argued that the sentence violated his rights of the Eighth Amendment which assures protection from unusual and cruel punishment. He appealed the initial verdict to the state’s Court of Appeals and with a stalemate of 5-5 ruling last year, the Supreme Court conceded to review the case.

Within a short period, six judges corroborated the trial court’s verdict. The judges affirmed that only one sentence was available in Russell’s case which the trial judge obeyed to the letter. The high court went on to explain that Russell, having a violent offender history and repeated strikes gave the trial judge only one option which was ordained.

Not the First Time

According to Russell, his case wouldn’t be the first time the courts have convicted perpetual offenders to life imprisonment. He believed that includes the case of Solem vs. Helm.

In that trial, Jerry Helm, an individual who had been previously convicted of six nonviolent crimes, perpetrated a kind of check fraud, issuing a check of ‘no account’. Under the statute of South Dakota where Jerry committed the crime, he would have faced a fine of $5,000 or a five-year jail time. But because he was a perpetual offender, he also was sentenced to life imprisonment.

The United States Supreme Court authorized an appeals court decision claiming such a verdict is prohibited under the Eighth Amendment. Justices at the local level claim that Russell’s case can’t be compared to Jerry’s. A large percentage of judges think that the verdict is justified given Russell was a violent offender — a major difference from Jerry’s case who was a non-violent offender.

Judges also provided a detailed account of Russell’s previous arrest. According to them, it is vital to point out that the arrest was made when enforcement agents were trying to satisfy another drug-related warrant on Russell. This also included fulfilling the search warrant that was issued against him. According to the judges, Russell’s arrest was only possible after alchemical gas was deployed.

Certainly, the trial judge was well cognizant of Russell’s violent history and registered it in the record placed before him. Hence, after considering all relevant matters and information, decreed a verdict of life imprisonment.

Associate Justice Robert Chamberlin, together with Justices Dawn Beam, Kenny Griffis, David Ishee, and James Maxwell wrote most of the opinion. The trial court’s judgement was also supported by Chief Justice Michael Randolph. Although, he wrote a distinct opinion together with Ishee and Beam and in part by Chamberlin and Maxwell.

The dissenting opinion was written by Associate Justice Josiah Coleman together with Justices Leslie King and James Kitchens. The opposing justices argued that burglary wasn’t considered a violent crime until the Mississippi Code, as a matter of law made it so on the 1st of July 2014. The justices also challenged whether Russell had a history of violent crimes.

According to the dissenting justices, before June 2014, burglary was deemed a violent crime if violence happened during a burglary. They added they are uncertain if Russell perpetrated acts of violence during those burglaries. Although, the fact that Russell was given the chance to take part in the Regimented Inmate Discipline by the sentencing court indicated that no act of violence transpired.

According to the information available on the official website of the U.S Department of Justice, the RID program in Mississippi was established for nonviolent offenders before it was dissolved

Justices on both sides of the case also talked about the public change in attitudes towards cannabis. The dissenting justices argued that medical cannabis use has just been recently legalized by the state.

According to the justices, Mississippi joined a long list of its sister states in legalizing medical cannabis use and establishing a program to the effect. They wrote that by the bill that created the program, the difference right now between jail time for possessing cannabis of more than 2.5 ounces would be a prescription.

Evaluating the argument, the majority of justices came to acknowledge the dissenters’ estimation of evolving perceptions toward the criminality of cannabis. They concluded that legislatures should put into consideration the evolving perception into account when establishing sentencing statutes.

Russell was sentenced for having cannabis of about 1.5 ounces, an amount that is well within a range of the legal limits established by the state’s law on medical cannabis.

While writing the dissent, Coleman pointed out that the court should permit Russell to get the relief he seeks. He affirmed that most justices undertake the responsibility of providing procedural guidance to courts handling defendants with similar situations to Russell. Yet, Russell is being denied the same procedural guidance and in doing so, Russell will have to spend the rest of his life in jail.

Russell is about to spend the rest of his life in jail and it’s so sad to see, especially because his “third strike” of cannabis possession was within the range of the legal limits established by the state’s law on medical cannabis. To prevent situations like this in the future, legislatures need to put into consideration the evolving perception into account when establishing sentencing statutes.

MISSISSIPPI APPROVED MEDICAL CANNABIS AS A STATE, READ THIS! 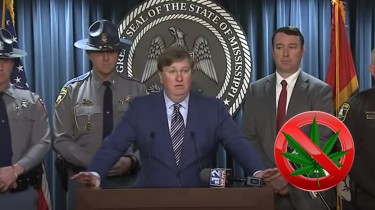