Diet Weed Strains – What Strains Are Loaded with THCV and Work for Appetite Suppression?

It is a popular fact that the use of cannabis helps to stimulate the appetite. The effect has popularly been termed munchies by many cannabis users. Though delectable to some, this effect is not needed in some cannabis users, especially those looking towards weight loss. This article will look into some of the popular cannabis strains that are good for appetite suppression. These strains will surely catch the eyes of those that are aiming for weight loss and appetite suppression.

The endocannabinoid system (ECS) of the body is the system which the cannabinoids in the plant matric interact with. By direct or indirect stimulation of its receptors, it produces different physical and medical effects on the body. The mechanism for appetite increase known as munchies is modulated through the CB1 receptors. THC activates the CB1 receptors which then stimulates the appetite. While there is still limited research on this mechanism, this remains the accepted explanation for this effect. Strains with large amounts of CBD along with THC can counter this mechanism of CB1 receptors. This is because CBD acts at the CB2 receptor which inhibits the action of CB1 receptors.

Strains with an increased ratio of CBD to THC have a high tendency to slow the urge to eat while high. THCV is another cannabinoid known to be effective in curbing increased appetite. Much like THC, THCV also interacts with CB1 receptors however its action is different. THCV acts as an antagonist at both cannabinoid receptors in the body. This simply means that it gives an opposite effect to that of THC in the body. As THC stimulates the pleasure of eating food, THCV acts to block these reward centers and make food less desirable. This is the reason why come cannabis users experience weight loss more than those who do not use it. The question now is why strains should one use to facilitate this appetite suppression.

Harle-Tsu is a special hybrid strain that is derived from two unique parents with a high CBD percentage. Harlequin is a special CBD-dominant strain that also has very little THC content. Sour Tsunami is the other patient and it has a high CBD content like Harlequin. Harle-Tsu is gotten from the merger of both parent names. Thie CBD characteristic of Harle-Tsu has made it very popular in medicinal marijuana for relaxation of patients with euphoria or paranoia. The high CBD content of Harle-Tsu through its effect on the CB2 receptors will help to suppress appetite tremendously.

This strain is also similar to Harlequin as Sour Tsunami is one of its parent strains. The strain is known for its high CBD content and unique earthy and sweet flavor. Canna-Tsu is used in medicinal marijuana to improve mood and focus in patients that can be prone to depress state. It is also equally effective in bringing calm to bowel upsets without promoting the onset of hunger pangs.

This is a popular strain used to calm an over-excited appetite. It’s a hybrid gotten from the cross of Afghan Skunk and Cannatonic which caused its high CBD content and low THC content. Remedy has little or no psychoactive effect while giving maximum relaxation and calm to its users. It is also used medicinally for relief from pain, tension, insomnia, headaches, and anxiety.  Remedy has no effect on stimulating the appetite as its total THC content rarely ever exceeds 1 percent. This makes it a perfect strain for suppressing appetite.

Other strains with high CBD content that can be used to suppress cannabis strains include Cannatonic and MediHaze.

If you high an over-excited appetite or you’re looking to shed some weight without stopping your cannabis, look no further. This strain has an energetic high that can promote productivity with little or no euphoria. This is mostly due to its high THCV content which gives an entourage effect coupled with THC, CBD, and other cannabinoids.

This is a powerful strain as the name suggests which is from a long line of African landrace sativas. It could just be the answer to all your prayers towards resisting all junks that you use to quench the hunger pangs. The African strain is known for its spicy and peppery aroma. This helps in keeping the senses on their toes and not a rumbling stomach. It also has a high THCV content like Durban poison which makes it excellent for curbing appetite.

This is a popular cannabis strain that is known for its sweet citrusy taste. This unique strain doesn’t promote the onset of munchies like other strains. It gives an energetic and elevated feel without the unnecessary need to eat all that you see. This is due to the high THCV in the strain which makes Moby Dick perfect for suppressing appetite.

The special strain with the unique name has a high THC content and high THCV content as well. Its THCV content can rise as high as 5 percent which is complemented by its lemon scent to promote satisfaction. One characteristic known with Jack the Ripper is that it promotes an excited state which is expressed with a talkative mood.

This is another strain with African heritage that possesses a high THCV content. It has a strong psychoactive effect which is mostly targeted toward improving creativity and focus. Users of the dynamic strain are therefore more likely to indulge in physical activities like sports, hiking, and painting. With this, they are less likely to be interested in exploring the contents of the fridge all the time. 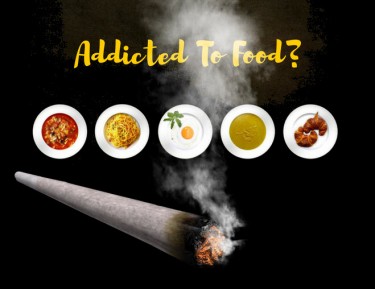 ADDICTED TO FOOD, CAN CANNABIS HELP, YOU BET!