Weird Stuff That Happens When You Are High

Has weird stuff ever happened to you while high? It used to happen to me all the time, but lately my smoke outs have been pretty much “normal” without too many disruptions. I wanted to see if it was only me who experienced “strangeness” during smoking sessions, and I decided to look online to see if other people had similar accounts.

Fortunately for me, I’m not insane!   There have been many people that have experienced some whacky things while they were high and today we’re going to be taking a deep dive into some of the strangest, weirdest “stoned occurrences” I could find.

So let’s get weird!

There’s a lot of weird stuff I can pull from my mental archives but one of the stranger moments was when my brother and I was sitting on our rooftop smoking weed at night, just shooting the shit when all of a sudden a bunch of “balls of light” shot up from behind the mountain that was visible directly from my home.

At first, it was one solid ball of light and then it split into seven or eight spheres, maneuvering in elliptical patterns until it flew away beyond our sight.

I saw something similar a few days later with my girlfriend at the time – she went into immediate denial about what she was witnessing. So yea, maybe one of my weird stories was seeing UFOs in the sky on several occasions, but that first happened when I was high.

The second time (with my girlfriend) I was sober.

However, this is just one of the numerous examples. From meeting strange people to finding strange locations, cannabis has opened up my mind to the weird and wonderful.

So let’s see what others have seen, heard, or experienced.

It seems whenever my friends and I chill and smoke a few bowls weird shit starts to happen around us. One time we were sitting in a parking lot at an [8] listening to some good music when this brand new red Ferrari pulled up right beside us and when we looked over I swear I felt I was in a movie. This guy looked like a rockstar with his long blonde hair and the way he was dressed. It looked like his wife in the passenger seat and she looked like a model, she was insanely hot. When they pulled up she was putting on makeup and he was jamming out hardcore. When they got out he looked straight at me and winked before closing his door and then he wrapped his arm around her and they just walked off. After it happened we were all just so confused we just sat there trying to process what just happened. Keep in mind I live in a small town in Canada, so this was way out of the ordinary. Strange things like that always happen after we smoke.

While it’s entirely possible that these dudes were only coincidentally at the right place at the right time when a millionaire playboy was driving about in his Ferrari, driving through little towns and exploring the land – when you’re high the experience is amplified.

The fact that it continues to happen to this person and their friends means that they have opened a box of cannabis-weird and now live in the new realm of “anything’s possible!” It’s a crazy place to be at, like that time a random dude walked up to me on the streets of California and handed me a joint saying, “God told me to give this to you!”

This one time me and my buddies where going back to our fire pit in the woods smoking a blunt and I shit you not some dude was in a van with door wide open just jacking off he looked at us and just kept doing it. Nasty as hell. Scared for life. Never went back that way again.

For a short moment the user and his buddies understood the plight of millions of woman who are assaulted by random cock from the internet – except, this was wild forest cock on full display. The guy looking at the people does increase the level of “WTFness” and most certainly will ruin a good high.

They probably ended up smoking a pound of weed to forget their “wild cock encounter.”

A Living Pile of Leaves!

This is more of a sketchy kind of weird, but here goes.

Two friends and I were in my car, passing around a pipe after smoking some joints, parked in the middle of the country on a woods trail. It was 11pm, so the trails were “closed” and it was dark as fuck. Well, me and one friend got there before the other guy since he drove separately, so we walked down the trail a bit before he got there. We thought there was a bag of leaves just chilling in the middle on the ground, but we didn’t get close enough to see for sure because my friend pulled up behind us, so we went to smoke instead. As we sat in my car, some guy in a white shirt starts walking towards us, coming from the trail. My friend who was in the back seat was wearing a white shirt, so I assumed that it was him and I was way too baked to realize he ever left the car.

So I asked my friend in the passenger seat, “When the fuck did B get out of the car?” He looks back, see’s B in the back seat, and then looks forward and see’s the guy walking up the trail. I hear him say “oh fuck…”, at which point I make the connection it isn’t B. I say oh fuck, and then B says “oh fuuuuuuuuck”. We sit there, i’m holding the bowl, and the guy walks past us. I asked the dude what’s up so not to seem sketchy, totally forgetting i’m just holding my fucking bowl in my hand. He just gave me a “sup” and kept walking. I took one last hit and then we got the hell out of there.

Sometimes it’s a guy laying on the trail, not a bag of leaves.

Sketchy indeed. People have been mugged like this before. Some dude laying in the leaves and the next thing, there’s a knife near your gut with a desperate dude yelling, “Wallets and Phones!” Perhaps this was one of those instances.

My internal senses said, “leave this dude” while my altruistic self was like, “We must save him!” My wife said, “let’s bail!”

When we got to the town where we were staying at they told us that he’s the village drunk, and gets like that daily. It wasn’t even 12 PM yet. So sometimes, it’s drunk sleeping one off!

One time my friends and I came home from college and one thing you should know is our home town is extremely conservative and there are cops roaming practically every corner of the town.

Anyways, my friends and I were smoking in a parking lot hot boxing my friend’s car and cops kept circling us and we all freak the eff out when we’re high and see a cop.

So we up and left for our next, more discrete smoke spot. After a few minutes of toking, a few more cops kept passing us and of course we became more and more paranoid.

We then moved to a gas station parking lot and it was pretty late. Low and behold, a cop drove by and really freaked us out so we decided to put the weed away for a while and just drive around.

About an hour later, we drove by all three smoke spots and I am not shitting you, multiple cops were parked at all three spots, outside of their cars EXACTLY where we were parked. We all flipped out, probably for no reason at all, but we came to the conclusion that our paranoid, high intuition wanted us to leave at the right time before the cops could bust us. We were one step ahead the whole time.

The unconscious mind is a powerful thing that processes roughly 10,000,000 to 11,000,000 bits per second. When your gut starts telling you to move – MOVE! Most of the time when I have a gut feeling that I can’t shake, I make sure to pay attention.

These people tapped into their higher functions and were able to discern that “the pigs be coming!” Fortunately, for them they were able to heed their internal guidance system and came out unscathed by the porcine-assault on happiness and good times.

A Day in Silent Hill

This one comes from cyncantspell,

This was a long time ago. My ex and I went out to a friend’s house, which was way out in the middle of no where, watched the first Silent Hill, and then smoked. On the way home, there was this really, really thick fog that wasn’t there before. We were joking around, saying we were in Silent Hill. After a few minutes of not seeing any cars, we start to get a little paranoid. So, we are driving over the bridge back to our town, and we notice that all of the stop lights were green. Freaks us out even more. Then, he makes a joke about how maybe the house blew up and we were actually dead. Out of no where, a firetruck and an ambulance come racing towards us going in the direction we came from. At this point, I’m freaking out. I’m seriously hyperventilating. The whole way home, the fog persisted and we did not see any more vehicles, which was weird for my town because it was around 4 in the morning and usually there is pretty decent traffic because there is a shipyard and a big marine company that both start work around 5am.

That’s really the only weird thing that happened but it freaked me out really bad because I was so damn high.

Damn – even sober I’d feel this one. Being high must have amplified the experience immensely. I can understand how she started to hyperventilate because that shit is weird and freaky. It reminds me of a time I dropped acid in a graveyard…I saw a whole lot of “dead people”. And then snakes, a whole lot of snakes falling from trees….they weren’t real of course – but to my tripped out mind it was perfectly in place.

Nothing as scary as Ms. Silent Hill up top.

Let me know about the weird and wonderful!

These are but a few examples of the weird stuff that can happen to you when you’re smoking weed. As mentioned, these days I don’t hardly have the same level of “weirdness” when I’m smoking. This could very well be because I invoked a deeper sense of weirdness into my mundane sober life. Studying things like the occult, esoterica, psychedelics, trance states, breathwork, and more – weird is my normal.

Nonetheless, I’d like to know if any of you fine pot heads have ever experienced a heightened degree of weirdness when you’re high. Let me know in the comments!

MORE HIGH AS A KITE STORIES, READ ON… 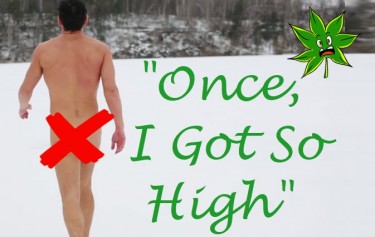 ONCE, I GOT SO HIGH….STORIES FROM THE TRIP BEYOND!

How Much Weed is in a ‘Zip of Cannabis’?