Was Biden Lying To Us About Marijuana All Along While Campaigning?

For many who thought that President Joe Biden was going to help reschedule marijuana, the one thing we’ve been waiting years for, it seems that we thought wrong.

Did he lie to us when he pledged to decriminalize marijuana as well as automatically expunge previous marijuana convictions while campaigning back in 2020?

In fact, Biden’s lack of efforts with regards to marijuana legalization has been so disappointing that senators have had to call him out on it earlier this month. Six US senators wrote a letter sent to the POTUS asking for two requests: one, that the attorney general work to finally remove marijuana from the Controlled Substances Act and two, for the president to use his power to provide relief from people convicted of non-violent marijuana crimes.

It was signed by Democratic Senators Elizabeth Warren, Cory Booker, Bernie Sanders, Ed Markey, Ron Wyden, and Kirsten Gillibrand. They added that the Department of Justice (DOJ) took all of six months to respond to a letter sent in October 2021, pushing the attorney general to begin the steps needed to federally deschedule marijuana. They said that the DOJ’s response was “extraordinarily disappointing”.

“It is obvious that cannabis has widely accepted medical benefits, affirmed by medical and scientific communities both here and across the globe,” reads the letter. “The therapeutic properties of cannabis caused by the effects of both the tetrahydrocannabinol-alpha (THC) and cannabidiol (CBD) components make it an excellent alternative to highly addictive opiates for pain relief,” it reads.

“The Administration’s failure to coordinate a timely review of its cannabis policy is harming thousands of Americans, slowing research, and depriving Americans of their ability to use marijuana for medical or other purposes,” said the senators in the letter.

Then last July 16, during a White House press briefing, the president was asked by a reporter if he will be fulfilling his campaign pledge to free marijuana prisoners, which he has the power to do in federal prisons though not in state prisons. He responded with: “I don’t think anyone should be in prison for the use of marijuana. We’re working on the Crime Bill now,” though it remains unclear what on earth he was talking about.

As US President, he has the executive power to pardon any federal crime, there is no need for a bill or a vote from Congress to do so.

So why isn’t he acting on it? He simply needs to sign it.

“Our country’s cannabis policies must be completely overhauled, but you have the power to act now: you can and should issue a blanket pardon for all non-violent federal cannabis offenses, fulfilling your promises to the American people and transforming the lives of tens of thousands of Americans,” wrote the senators in the letter.

“As a candidate for President, you argued that, ‘We should decriminalize marijuana’, and, ‘Everyone with a marijuana record should be let out of jail, their records expunged, be completely zeroed out,’” they continue in the letter. “The first and simplest step in the process is a blanket pardon. The Constitution grants you the authority to pardon broad classes of Americans to correct widespread injustice, as previous presidents have done.”

The sad reality is that the President has taken too little steps to fulfill his campaign pledges since he stepped into the office.

What About Schumer’s Bill?

Last week, a bill by Senate Majority Leader Chuck Schumer was introduced; known as the Cannabis Administration and Opportunity Act, it would decriminalize marijuana federally while also allowing states to have the liberty of setting their own marijuana laws without worry of federal penalties from the government.

Senators Schumer as well as Ron Wyden and Cory Booker have been working on this bill over a year ago, though it needs to be passed in the senate. The chances of it passing are small at best, though the good news is that having this piece of legislation can influence discussions on legalizing marijuana in the near future. In addition, some parts of the bill may even be adopted by other bills that have a higher likelihood of passing before the year ends.

The bill will also help expunge federal marijuana convictions while creating a fund that law enforcement can use to prevent illegal cannabis grows. Grant programs will be established to help small marijuana business owners who are new to the industry and who come from communities that have been disproportionately affected by the drug laws. Additionally, the bill mandates the Department of Transportation to create a nationwide standard for testing marijuana-related impairment while minimizing marketing of marijuana to minors.

So far, it’s only been Schumer who has been championing the legalization of marijuana in Washington. He has made it clearly a priority in the last 2 years even if marijuana legalization has spread rapidly around the United States and the government isn’t giving it the time it deserves.

Disappointing is an understatement when it comes to describing Biden’s efforts – or lack thereof, to legalize marijuana. We have to wait and see, should the government suddenly prioritize marijuana convictions and legalization within the coming months. Don’t get your hopes up: thanks to the work of senators, the administration will also be held accountable and policed because of their promises during the campaign period. 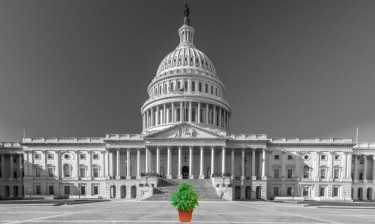 3 DEMOCRATS INTRODUCE A CANNABIS LEGALIZATION BILL IN THE SENATE!

How to Grow Weed in A Closet

How to Grow Weed in A Closet