Selling Weed Without a License? Trump Thinks You Should Get the Death Penalty

Trump Thinks The Death Penalty Is The Solution To Illegal Drugs

In a speech he delivered last week in Las Vegas, Nevada, Former President Donald Trump said that the US should replicate the drug policies of China where drug dealers face the death penalty after quick trials.

He discussed drastic measures which he believes are the solution for law and order in the country, praising China’s preferred method of governance. “The penalties should be very, very severe. If you look at countries throughout the world, the ones that don’t have a drug problem are ones that institute a very quick trial death penalty sentence for drug dealers,” he said.

“It sounds horrible, doesn’t it? But you know what? That’s the ones that don’t have any problem. It doesn’t take 15 years in court. It goes quickly, and you absolutely – you execute a drug dealer and you’ll save 500 lives,” he explains. He went on to say that the US needed a crack down on illegal drug dealers with the strengthening of police force, whom he thinks should be present in every corner.

“It’s terrible to say, but you take a look at every country in this world that doesn’t have a problem with drugs, they have a very strong death penalty for people that sell drugs,” Trump said.

The United States is already well on the way to spreading cannabis legalization – as well as the legalization of therapeutic psychedelics, both of which have tremendous benefits for society as proven by the data. But the opioid epidemic still haunts us, taking lives each day – and the death penalty is no solution to the opioid epidemic.

Death Penalty Is Not The Solution

If any country has a drug problem, the presence of illegal drug pushers is merely a symptom of a bigger issue. Death penalty is never the answer.

For people like Trump who think it is, their moral compass is seriously off the radar. Nobody has the right to take someone’s life from them.

According to a 2018 report by Harm Reduction International, some 35 countries around the world still issue the death penalty for drug related offenses. However, while these countries choose to use capital punishment, that doesn’t mean that it’s right or that it works. In fact, the trend is that more countries are working to abolish the death penalty for crimes – not just drug-related crimes, so if the US decides to adopt such an extreme measure, it would go against the global trend. Besides, the countries that have these measures in place don’t have any proof that it works in stopping the cycle of the illegal drug trade and the pushers behind them.

One also has to remember that in numerous cases, many people who have had no choice but to become pushers have only done so out of desperation. They are usually tricked or forced into going against the law, and oftentimes they are only teenagers. It is simply not fair to rob a teenager of their right to live – they are not the ones the law should be after.

Take the case of Shahrul Izani of Malaysia, who was only 19 years old when he was convicted of drug trafficking back in 2003. He was found with 622 grams of marijuana on him and was then given the death penalty due for 2009, with many fighting for his life. Thankfully, Amnesty International Malaysia was effective in their campaigns for his clemency and instead was sent to prison, where he is scheduled to be released in 2030.

Malaysia doesn’t disclose their execution statistics, though according to experts, more than half of the death sentences in the Asian country have been due to drug convictions. However, Iran and Malaysia were once two countries that were prime supporters of the death penalty yet both countries have already made efforts necessary to minimize having to go to this extreme for drug-related measures. It makes no sense for a country supposedly as progressive as the United States to start going in the opposite direction.

Instead, we should be looking at measures that are always humane and evidence based. More importantly, any measure should seek to address the root cause of any public health crisis. Policies are needed to ensure that marginalized communities are always protected while spreading awareness and information on harm reduction policies. Treatment and medication for those who are addicted to drugs need to be provided, but these things simply do not happen in cultures that use the drug penalty to punish drug pushers with the death penalty.

At the end of the day, capital punishment goes against the values of a democratic system. There are many things that are unfair, unjust, and inhumane about it but in the United States (and many other countries), what makes it worse is that it’s carried out on people based on their wealth status. It’s far more common for marginalized people, people of color, and the poor to be executed compared to rich, white people.

Besides, going after the death penalty will only waste resources: law enforcement, taxpayer money, and more. There is no real benefit for public health and will not even stop violent crime. Experts know that the real solution to end violent crime is to provide more employment, work on a better, more lucrative economy, and increasing the police force.

The data is there: based on the FBI’s Uniform Crime Reports, states that have the death penalty have a higher murder rate compared to states that don’t. It does nothing but fool the voting public that the government is indeed working on reducing violent crime but these laws really do nothing to protect you from criminals. Nobody deserves to die – not by the hand of another man and most especially not the law. 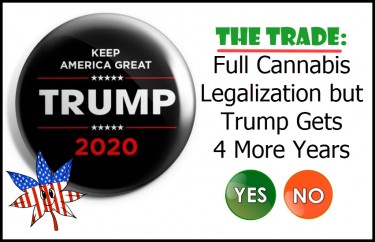 WOULD YOU MAKE THIS DEAL, TRUMP AGAIN FOR LEGALIZATION?

NACAT Webinar: The Complex Universe of Cannabis with Hilary Bricken

These Mobile Apps Could Help You Experience A Trip Without Tripping

These Mobile Apps Could Help You Experience A Trip Without Tripping