Disrupt Europe? – Switzerland Opens the Flood Gates to Ship Cannabis All Around the World

At the moment, there is an aggressive revolution going on in Switzerland. The nation is preparing for what will probably be the most disruptive recreational trial in Europe.

According to Forbes, starting on the 1st of August, Switzerland will allow medicinal marijuana patients to obtain prescriptions straight from their doctors instead of having to apply for authorization from the FOPH (Federal Office of Public Health). The new regulations effectively make medical marijuana legal in the nation and permit the export of medical marijuana for commercial purposes. However, the products can not have a THC content of more than 1%.

A lot of other important events are taking place in the meantime. In particular, the government is set to eliminate the restriction that doctors who prescribe cannabis do so only with specific permission.

The Swiss Federal Council, a seven-member administrative body that acts as the nation’s joint head of state and federal government, began deliberations on amending the nation’s Narcotics Act this past Wednesday.

Both types of marijuana, i.e., the recreational and the medical kind, have been prohibited in Switzerland since 1951. By changing the federal Narcotics Act in this manner, doctors in Switzerland will be permitted to prescribe marijuana more or less as free as they see fit. Presently, there are about 3,000 approvals handed out every year to treat patients with neurological diseases, MS, and cancer.

As a result of this, cannabis will become just a regulated narcotic as it is with Germany across the DACH border (DACH is an acronym for Switzerland, Germany, and Austria, which are in a special trading alliance). The three countries are also nearly aligned culturally, beginning with a language in common.

THE ODD TWIST FROM THE SWISS

Since we are dealing with marijuana, there is always going to be a twist in all of this, regardless of where the reform is taking place.

On a positive note, the growing, producing, and selling of medical marijuana will be approved on the federal level for the very first time. Export for commercial purposes will be allowed. The rules for imports, however, are not as clear ( though it is not likely that anyone will restrict imports of the EU-GMP medical type).

This can hardly be called revolutionary, considering that Switzerland’s nearest trading neighbor to the north, Germany, moved to do this four years ago. In fact, the first cannabis grown in Germany is only now making its way to pharmacies there. Meanwhile, growing cannabis for personal use is, of course, still prohibited.

Now, here is the weirdest, if not most suspicious twist of all.

In the coming months, Switzerland will also start an unusual recreational trial. The trial will see that pharmacies in Switzerland will be able to sell high-THC commodities to anybody who has the money to pay for it so long as they are over 21 years old.

The solution of the Swiss is not as cynical as that of the Dutch, who permitted insurers to stop paying back medical marijuana claims almost immediately after Germany amended the law to say that public insurers did so back in 2017.

That being said, the experiment is definitely taking place at a fascinating time, just on the other side of the border. The conversation by German federal lawmakers on which direction the marijuana legalization winds would blow as a result of the election in late September was one of the most crowded panels at the latest ICBC in Berlin.

Everywhere you go, cannabis reform is a sore point, including, and maybe even specifically, in Germany, which has by far the most prominent medical marijuana market in Europe. It is also the most influential. Cannabis reform is a fiery issue just about everywhere. Furthermore, it is exceedingly improbable that any reformers in Germany will pass up the chance to inform German lawmakers, that are still extremely reluctant of what the Swiss are currently doing.

The continuing, hardline response of the government to any kind of cannabis reform is one of the biggest pet peeves in the DACH region (which, of course, also includes Austria). An illustration of this is the recent catastrophe that Lidl, one of the biggest retailers in the world, had in Munich.

As a matter of fact, the recent absurd prosecutions, especially in Germany where hemp tea is a hot topic, and the absence of reform are likely to drive at least some reform in Germany. The Swiss appeared poised to lead Europe, if not the DACH, in all things both recreationally and medically reform related or at least minded. Add to the equation general ease of restrictions in Switzerland, along with what appears to be an already slicker if not more reasonable plan for manufacture and cultivation, and the Swiss looked ready and willing to take the lead.

The alteration is not only welcome but also long overdue, according to Dr. Francis Scanlan, CEO of Cloud 9 Switzerland, a life sciences business that is preparing to introduce its own THC Swiss chocolate bar after breaking new ground with his product being the very first CBD edible to commence sales in Dubai.

This is a very sensible, if progressive, action in reaction to the widespread acknowledgment of cannabis as a legitimate treatment that genuinely benefits patients and has the potential to save healthcare costs while also producing tax income, according to Scanlan. “What is taking place in Switzerland for medical cannabis on prescription and our new recreational Pilot Program is very impressive and should be considered as a sensible way to regulate a plant that has been demonized around the world for far too long,” the statement reads.

The new regulation in Switzerland puts an end to the ban on cannabis that had existed since the year 1951. The regulation will legalize both recreational and medical marijuana completely in the country. Also, patients that are already on marijuana medication and potential medical cannabis patients will not have trouble accessing the marijuana as, under the new law, doctors will not need to seek permission before prescribing cannabis. The law also sees Switzerland being the most progressive of DACH and places them in a leading position. 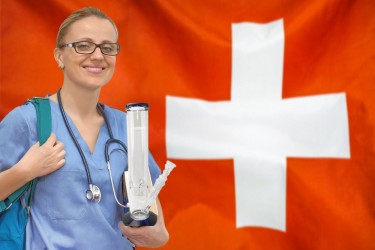 SWISS SET A CANNABIS LEGALIZATION FRAMEWORK, WILL IT WORK?

How to Grow Cannabis From a Seed in 10 Easy Steps