$10.4 Billion in Tax Revenue from Legal Cannabis Sales, But Where Does All That Money Go?

The finance aspect of the cannabis industry is certainly getting a lot of attention lately and it is easy to see why. With the industry growing at an astonishing rate, many states are looking to rack in the big bucks in terms of tax and licensing revenue. Which states have legal markets for medical and recreational marijuana? Which States are racking in the most in terms of revenue? How are these States using this marijuana revenue? Read on as we provide answers to these questions and many more.

States in the U.S recorded a tax revenue of $10.4 billion from cannabis sales at the end of 2021. This figure doesn’t factor in revenue produced by medical marijuana distribution. From this alone, it is easy to see why many entrepreneurs are looking to get into the frenzy of the cannabis industry. Likewise, states are looking to also get in on the act through legalization and tax administration to rack up revenue.

Tax revenues from marijuana sales vary across states thanks to a number of factors. First, cannabis is illegal federally which means states with legal markets have full jurisdiction over policies and tax regulations. States that have the program established longer and have full operational markets and strong populations are also expected to have huge returns in terms of tax revenue. This is why states like California, Washington, and Colorado could go higher than $1,294,632,799, $559,500,000, and $423,486,053, respectively. Other states with high returns are Illinois, Arizona, Michigan, and Massachusetts.

Colorado and Washington were at the forefront of the push for the legalization of recreational cannabis with moves coming as early as 2012. With eventual legislation coming in by 2014 and 2015, the states were able to rake in considerable revenue. California has also been able to bring in $3,362,314,514 in revenue after its recreational marijuana market started in 2018. This excess revenue certainly came in handy for some of these States as they faced shortfalls thanks to the COVID-19 pandemic.

Retail sales of marijuana in Alaska began in October 2016 after it was voted upon in 2014. The state has the Marijuana Control Board which is saddled with the responsibility of tracking cannabis operations and issuing licenses. The state has seen a steady increase in tax revenue over the years which resorted in a 2021 turnover of $30,054,250. Cultivators in Alaska are taxed $50 per ounce for mature flowers and $25 per ounce for immature flowers. Alaska allocates 25% of the revenue to the general fund, 25% to the Marijuana Education Fund, and 50% to the Department of Public Safety, Corrections, and Health and Social Services.

Following voters’ approval of the Marijuana Legalization Initiative in 2020, Arizona approved l recreational market. The Arizona Department of Health and Human Services is placed in charge of all activities such as regulations and licensing. The state had a tax revenue of #217,553,000 at the end of 2021. Two types of taxes are imposed on marijuana in Arizona, 16% excise tax and transaction privilege tax. The excise tax revenue is then allocated to the Highway User Fund, Community Colleges, Municipal police, Fire districts, The Justice Reinvestment Fund, and The Attorney General.

The Department of Cannabis Control was saddled with taxation and licensing of marijuana operations after the state started retail sales in January 2018. Four years on and the state has the biggest cannabis industry in the country. California taxes $9.65 per ounce of flowers, $2.87 for leaves, and $1.35 for the fresh plant. The revenue gotten from the tax is first used to cater to regulatory and research costs. Afterward, 60% is allocated to anti-drug programs for kids, 20% to environmental programs, and 20% to public safety.

The state has the oldest retail cannabis market in the country and a robust allocation plan. Taxes on marijuana include 15% wholesale tax and 15% retail excise tax while exempting it from general sales tax. The revenue recovered is then split between state and local government at the ratio of 9 to 1. The state further divides its share between the general fund (15.56%), state public school fund (12.59%), and marijuana tax cash fund (71.85%).

Recreational cannabis was approved in Illinois in May 2019 and retail sales started in January 2020. The taxation of marijuana in Illinois is 7% in wholesale taxes. It also has special levies on retail taxes such as 10% on products with 35% THC or less, 25% on products with 35% THC or more, and 20% on infused products. The generated revenue is then split between the general fund (35%), Illinois Recover, Reinvest and Renew Program (25%), mental health and substance abuse (20%), state bills (10%), local government (8%) and public education (2%).

After legalization was achieved in 2012, retail sales of cannabis in Washington commenced in July 2014 and have grown since. The state charges 37% retail tax on marijuana and 6.5% retail sales tax. The state exempts medical cannabis from sales tax. Washington allocates the revenue from marijuana to different sectors and projects. In 2020, the revenue was allocated to the state’s health professions account, the state health authority for research, the University of Washington for marijuana-related educational programs, and other research departments.

It is obvious to see that the money goes to a lot of places depending on which state your focus is on. The revenue from the marijuana tax is helping most states deal with different financial burdens. Hopefully, more states will soon come into the fray so all can benefit! 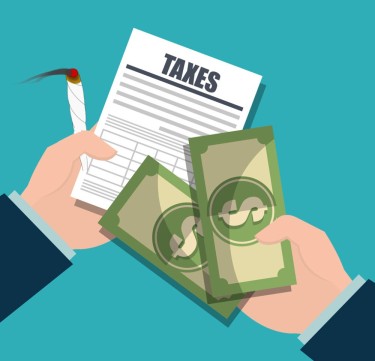 CANNABIS TAX REVENUES BY STATE, WHAT CAN THEY EXPECT?