When you feel ill, unwell, unhealthy, bad…a physician will prescribe you some medicine and would urge you to rest. In most cases, the pharmaceuticals will reduce the symptoms and potentially make you drowsy (and some other side effects too) and if all goes well…you’ll get better.

Irrespective of the pharma med they give you (except for opioids), these drugs don’t really provide any other element other than reducing the prevalence of symptoms. Which is why when it comes to cannabis as a medicine – many people claim it isn’t due to the fact that you ALSO feel good when you consume it.

In other words – one of the side effects of marijuana is euphoria.

The reason why I’m chewing on this concept today is because of a post I saw on Reddit that said the following;

the fact that the two types of acceptable marijuana usage (from the US) are differentiated with the names ‘recreational’ and ‘medicinal’ implies that recreation is not healing while also implying that medicine is meant to be neither fun nor freeing.  – Some Reddit User

This is what prompted me to explore this question some more. There are of course a few drugs that do make you feel “high” such as Pseudoephedrine, Dextromethorphan, some cold medicines, etc. This is where the term, “Robo-Tripping” comes from – from teenagers abusing cold medicine to get a “high”.

However, all of these medicines really don’t make you feel euphoric. You would feel “drugged”, you would feel “stoned”, but euphoric is hardly the word you’d use to describe these feelings. Furthermore, in order to get these effects, you have to abuse the medicine.

This is where cannabis differs greatly.

With cannabis, a single puff of a joint could be more than enough to awaken the mind to new sensations, deep relaxation, and of course – a brighter tint to reality.

The main logic behind separating euphoria and medicine is that some people argue that if medicine made you feel “euphoric”, people would abuse it to get high. However, this premise falls flat on its face when we see kids abusing diabetes medicine to feel “bloaty”. There is no inherent “euphoric feeling” when it comes to diabetes medication – yet, some people still try to get high off it.

This means that “euphoria” isn’t the driving factor for abuse. Perhaps, the people taking the drugs are looking for euphoria and are willing to take pharmaceuticals in great quantities to achieve the euphoria.

The question being, “Does this make things safer for people or riskier?” In the case of cannabis, euphoria is one of the main side effects, meaning you don’t need a lot to feel “high”, which means that the potential for excessive abuse is also greatly diminished.

This isn’t to say that there won’t be some depressed teen bong-ripping their problems away – it simply means that in terms of lethality, the cannabis is a far less damaging substance than let’s say drinking 6-“5 Hour Energy” drinks in less than an hour to feel like you’re coked out.

Even the Bong-ripping teen will be at a lower risk of incurring a lethal dose, than someone who abuses energy drinks daily. I’m also certain that health wise, the cannabis user would be “healthier”. And this is only taking into consideration a heavy cannabis user who bong rips budder every morning to open his or her eyelids.

If the drugs that they sell us do not have the intended consequence of euphoria, yet some people still abuse it to get high which makes it infinitely more risky to the user – perhaps euphoria in itself isn’t the problem. Perhaps, the type of person engaging in this type of risky behavior will try to get high irrespective of the substance.

Yet statistically, the vast majority of the people consuming those drugs DO NOT use it to get high. They use it to treat their conditions and according to their doctor’s recommendations. It’s only in the case of opioids that the “abuse problem” becomes a problem.

For the other drugs like Nyquil, Cough syrups and the likes, the abuse is minimal and while in an ideal world we’d have people not engaging in risky behavior – we don’t live in an ideal world…we’re here now with all the crazy pill snarfing teens out there…and this is a reality we must accept.

The good news is – it’s a fairly small portion of teens that do this. More teens abuse alcohol than other drugs because alcohol is socially accepted. Getting “high” is socially frowned upon…unless your  version of “high” is “drunk – then by all means!

But there is another element to Euphoria that we must also consider. Perhaps the reason these people seek out the euphoria is because they are trying to heal wounds that the eye cannot see.

The Case for Euphoria in (certain) Medicine

When you’re feeling “unwell” you’re also “feeling like shit”. In that, most people suffer emotionally from their affliction on top of the physical discomfort they feel from the actual disease. Everyone who has had a “severe cold” or some other physical ailment can attest that the “pain” captures the awareness.

When you take medicine that only treats the physical ailments – you may experience “some” alleviation, however, most people don’t “feel” hopeful about life. They don’t have any aspirations or excitement beyond “not feeling pain anymore”.

With cannabis, this is not the case. With cannabis, you get both the diminishing of the physical symptom, but also a boost in the mental appreciation of your situation. Euphoria lifts the soul out of a pit of depression (often associated with chronic illness), which in turn helps the body heal quicker.

There are plenty of studies that indicate that simply having a positive outlook can significantly impact the healing process in a positive way. When you’re stuck in a pity party because of your illness, a bit of euphoria might be all you need to kick your mind back into a more resourceful state.

I don’t understand why “feeling good” should be excluded from medicine, when it has a medical benefit by itself. I do understand the fear of abuse, however – as we have established before that those who will abuse will do so whether a medicine is euphoric by nature or not.

Furthermore, drug abuse is an issue of drug education – if we teach people to consume drugs responsibly, we would not eliminate drug abuse, but greatly diminish it.

Feeling Good while Getting Better should not necessarily be separate when it comes to healing. In certain conditions, things like Cancer, Chronic Pain, etc…a positive outlook on life can make all the difference.

Additionally, understanding that most people won’t abuse drugs we should not limit a substance because “some” can abuse it. Under that logic, we should ban all cars because “some people” are going to get drunk and drive.

Yet we don’t ban alcohol or driving…

I would like to start seeing studies on the “positive effects of euphoria in the process of healing”, which has not been studied at all. Ever! At the very least, nothing concrete that I discovered during my research.

Perhaps we should first understand these things before we simply declare them wrong. 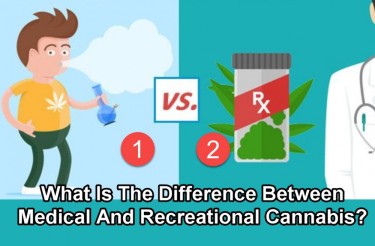 REC OR MEDICAL WEED, IS THERE ACTUALLY A DIFFERENCE?