Everywhere in the United States, states are doing their best to make their cannabis sector conducive for operators and consumers. Massachusetts is no different. Last week, Charlie Baker, the governor of Massachusetts, signed a new bill into law. This bill, S. 3096, is a measure that ensures equity in the state’s cannabis market. This is basically the first time the lawmakers would agree to pass additional reforms since recreational pot got legalized in Massachusetts.

The cannabis industry has always been partial to BIPOC residents. Even the same held when there were no legislative laws but an ongoing war against Cannabis. However, the new law seeks to correct most of these flaws.

S. 3096 includes various amendments MD to existing regulations within the system. It also subjects the Massachusetts Cannabis Control Commission to establish better rules within the next twelve months.

Some of the key provisions include:

All host communities are expected to record or document the revised costs imposed on the pot industry operators. This document must be prepared within four weeks after the annual permit renewal. As soon as it is ready, the law explicitly states that the municipality must provide or send the document to the licensee.

This way, the licensee would be able to study the record of the cost and confirm that they are not being exploited. For instance, if the licensee believes the imputed costs are unreasonable and not related to the regular costs imposed on other pot businesses, they can instigate a civil action against the town based on breach of contract. If the licensee wins the civil action, they will recover all damages, including the lawyer’s fees and other miscellaneous expenses.

Changes to the Host Community Agreements

According to the new law, host community agreements (HCAs), which are contracts made between legal medical and recreational cannabis businesses and the towns where they are located, would undergo substantial improvements. The HCA must adhere to the new legal requirements outlined in M.G.L. Ch. 94G, Sec. 3 unless the host community decides to dismiss the HCA requirement (d) completely.

Each city or town that has at least one adult-use marijuana retailer that is a “social equity business” will get revenues every quarter in the amount of one percent (1%) of all the recreational weed retailers that are operating in the municipality.

Timely Reviews and Approval by the CCC

The CCC now has a clear obligation and explicit authority to assess and certify each HCA as part of a marijuana company licensing application and at each license renewal, thus ending several years of confusion.

Additionally, the CCC may request more information from the license applicant and the host community in addition to providing written notice of any problems found while reviewing the HCA for compliance with the new statute.

According to the new statute, a Final License application cannot be approved until the CCC certifies that the HCA complies with the new statutory standards for HCAs, which must be done within 90 days of receiving the HCA.

Any actions involving pot possession, growth, or sales that were previously considered crimes but have since been legalized under state legislation must be ordered by a court to have their prior convictions expunged within 30 days of the petitioner’s filing.

The law orders that a CSETF be created to promote full involvement by people from neighborhoods that have been primarily affected by drug laws and enforcement in the legal marijuana business. 15% of the state’s Marijuana Regulation Fund’s funds will be transferred to the CSETF yearly, and additional cash from private donors, such as authorized marijuana firms, may also be contributed to the CSETF.

This trust fund will be converted to grants and loans for registered applicants vying for permits to establish cannabis businesses. The body will be headed by the State Executive Office of Housing and Economic Development. The new Cannabis Social Equity Advisory Board will supervise some of the CSETF’s activities.

The Cannabis Control Commission will enact better regulations to encourage residents from all municipalities to participate in the regulated cannabis industry, especially those residing in disadvantaged communities.

The approval of this law by Governor Charlie Baker signifies a positive step in the right direction. With this new cannabis social equity bill, Massachusetts will build a robust and equitable cannabis industry in no time. Many people look forward to enjoying the benefits that would be created once the CCC updates its regulations to implement the new amendments. Dozens will gain access to the legal cannabis industry once there’s an equal opportunity for all to succeed.

MORE ON SOCIAL EQUITY CANNBIS IN MASSACHUSETTS, READ ON… 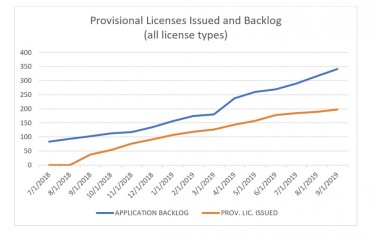 Weed buyer beware: THC inflation is getting out of hand