Historically, cannabis has long been part of traditional medicine used in many Asian nations, including Thailand, where the tropical weather is perfect for cultivation. It has been used to treat many illnesses from headaches to malaria and dysentery, to parasites, digestion, and even postpartum pain. During the 1960’s when the United States sent thousands of Americans to be assigned at military bases in Thailand, local cannabis exploded in popularity because it was potent but cheap.

Unfortunately, Bangkok was pressured by the US government in the 1980’s to get rid of the drugs and wipe out the entire marijuana trade. From 2003 onwards, the Kingdom of Thailand became notorious for its harsh drug laws. It would not be uncommon for drug smugglers and pushers to be sentenced to death, sometimes even by firing squad. These were part of the former Prime Minister Thaksin Shinawatra’s campaign against drugs, which took the lives of hundreds of people including tourists.

By June 9, 2022, exportation, import, production, possession, and consumption of the plant became legal in the country. They then launched a campaign to give away one million cannabis plants a day after, though ironically, discouraged people from using it to get high. Thankfully, the drug law reform was also able to help some 3,000 individuals go free from prison after being charged because of marijuana.

Cannabis dispensaries and cafes started popping up around Bangkok as well as other tourist destinations around the Kingdom. Anyone can grow marijuana right at home as soon as you’ve registered through a mobile app with the government. However, commercial growers are still required to apply for permits. They also saw an explosion of cannabis infused products ranging from tea and snacks to soaps, toothpaste, and even tea.

This is just what the country needed after taking a big hit during the pandemic.

But Public Health Minister and architect of the cannabis drug reform laws Anutin Charnvirakul said: “Don’t use it and sit smiling at home and not get any work done. Those things are not our policies,” he said in June. “We have erased the stigma, it’s being washed away like removing a tattoo. Don’t let it come back,” he said. Charnivirakul added that the marijuana plants are intended to be used for improving one’s health.

The problem is, the Thai government didn’t anticipate the massive widespread use of cannabis. Tourists can now walk into a dispensary and buy edibles or weed freely. While many champion the move, some see that this is abuse.

According to Charnvirakul, who has tried to discourage recreational smoking of marijuana, people who are found smoking in public can be penalized with a $704 fine and face the risk of spending 90 days in jail, reports VOA News. “Problems occur due to abuse of cannabis. This is not the aim of liberalizing the use of the plant. We want to promote medical use and boost the income of growers,” he told the press in June 2022.

He also said that pot-smoking tourists are not welcome. This is surprising, as cannabis tourism could offer a tremendous boost to the Thai economy especially now that tourist arrivals are steadily increasing, ready to inject life back into a tourism-dependent country. Thailand is home to the second biggest economy in Asia, expecting some 8 to 10 million foreign arrivals this year after a pandemic has greatly depleted the country’s income.

“We don’t welcome those kinds of tourists,” he said.

Anutin did say that recreational cannabis use may be explored once they know more about how cannabis works. “It might come in the near future,” he says.

Some critics point out that Thailand’s transition to a more progressive drug law is messy, to say the least. Government officials are saying contradictory things, and the regulatory framework wasn’t ironed out as well as it should have been from the beginning.

In fact, last July, new regulations were sent out to police stations saying that cops can’t get high at work. Now, they are saying that tourists can’t come and smoke recreationally while pre-rolled joints, fresh flower, and edibles are widely available in the streets. It also doesn’t make sense to restrict tourists from lighting up because even the locals who are benefiting from the quickly growing cannabis industry already see that marijuana and tourism are a match made in heaven.

Hopefully the government irons out the many legal gray areas soon. The cannabis market has the potential to grow to $1.2 billion by 2025, with numerous business opportunities for small growers as well as businesses, according to the University of Thai Chamber of Commerce.  Given the excellent growing conditions of Thailand plus the fact that it’s one of the world’s most popular travel destinations, the potential could be virtually limitless soon. It’s also a top medical tourism destination because they are well-known for quality healthcare and affordable treatment.

Regardless, it’s become clear that the marijuana market in Asia is poised for some serious growth. Perhaps other countries around the region will soon follow suit and help break the stigma that has tainted Asian countries for far too long. It’s not doing anyone any good – patients, people, farmers, and economies alike can all benefit from legal marijuana. 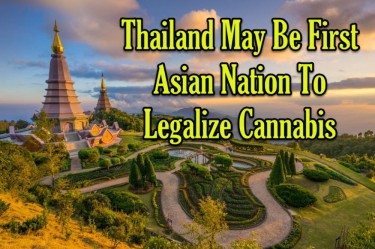