Federal Study Says Psychedelics And Cannabis Use Among 19-30 Year-Olds Is at An All-Time High, And That Is a Good Thing!

New Federal Study Says That Psychedelics And Cannabis Consumption Among Young Adults Is At An All-Time High -Why This Is A Good Thing!

They found that hallucinogen and cannabis use is at an all-time high for the 19 to 30 year old demographic, rising in 2021, reaching record highs that have not been seen since 1988. The study, called Monitoring The Future (MTF), also found that vaping nicotine among this age group has increased steadily since 2021. While many find the vaping trend worrisome, it’s a much healthier alternative compared to smoking cigarettes.

What was worrying was that alcohol consumption is still high, as binge-drinking rates have gone up again after reaching record lows in 2020. On the bright side, cannabis and psychedelic use is increasing, and this is excellent news for the emotional and mental well-being of young adults.

“As the drug landscape shifts over time, this data provides a window into the substances and patterns of use favored by young adults. We need to know more about how young adults are using drugs like marijuana and hallucinogens, and the health effects that result from consuming different potencies and forms of these substances,” said Nora Volkow, NIH Drug Abuse Director. “Young adults are in a critical life stage and honing their ability to make informed choices. Understanding how substance use can impact the formative choices in young adulthood is critical to help position the new generations for success,” she says.

“Overall, the results are very concerning,” Dr. Volkow says. “What they tell us is that the problem of substance abuse among young people has gotten worse in this country, and that the pandemic, with all its mental stressors and turmoil, has likely contributed to the rise.”

We disagree with Dr. Volkow, but more on that later.

Another study conducted by Columbia University, which was subsidized by the National Institute on Drug Abuse (NIDA), polled adult and teenage hallucinogenic consumption from 2002 through 2019. The study yielded similar results, revealing that drug consumption among those aged 26 and up had jumped to 5.5 million by 2019. They also found that there was a reduction in hallucinogenic use among the 12 to 17-year-old demographic during the same time period, which the authors attribute to “public health prevention efforts, as well as policy changes to reduce availability.”

This is good, because legalization means that the black market is less successful in dealing drugs to underage kids and efforts to control through regulation are more prevalent than ever.

Why An Increase In Psychedelic And Cannabis Consumption Is Good News

Decriminalizing hallucinogenic drugs and cannabis is the way to go. Regulating these drugs means that those who need the health benefits of these substances can safely obtain medicinal quality versions instead of those being sold on the street.

There are many benefits to an increased population indulging in hallucinogenic drugs. Keeping these substances illegal is doing no good.

For example, there is a review of 6,000 studies analyzing more than 40,000 patients and the impact of psychedelic drugs on them. These were used as experimental treatments to treat an array of conditions including alcoholism, criminal recidivism, schizophrenia, depression, and childhood autism. Participants ranged from scientists to artists, creatives, and engineers.

The researchers found that just one LSD session was already effective in reducing problem drinking among 59% of the participants who suffered from alcoholism. This is significant, considering the serious health risks associated with alcoholism as well as its harms to society, given that drunk driving has been linked to accidents and injuries on the road.

In addition, another study conducted by the University of Alabama at Birmingham (UAB) revealed that classic psychedelics, such as LSD, magic mushrooms, ayahuasca, dimethyltryptamine, and mescaline, have been linked to a reduction in antisocial criminal behavior. The study’s findings suggest that treating people with these substances has potential in reducing criminal behavior.

The researchers analyzed the association between criminal activity and consumption of psychedelic drugs among 480,000 adult participants in the United States over the course of 13 years. The participants were polled regarding their historical use of classic psychedelics. They found that consumption of psychedelics led to a 27% reduction in the chances of committing theft or larceny, a 22% drop in the chances of getting arrested for property crime, a 12% decrease in the odds of assault, and an 18% decrease in the chances of getting arrested for violent crimes.

On the other hand, they found that illegal use of other substances was associated with an increased chance of criminal behavior.

“These findings, coupled with older and emerging bodies of evidence, make a case that classic psychedelics may provide enduring benefits for criminal justice populations,” explains Peter Hendricks, Ph.D., UAB associate professor in the Department of Health Behavior. “They certainly suggest that clinical research with classic psychedelics in forensic settings should be considered.”

“Classic psychedelics can produce primary mystical experiences – also known as primary religious experiences or peak experiences – and have been used for millennia across cultures with therapeutic intention,” he adds.

“The development of innovative and effective interventions to prevent criminal behavior is an obvious priority,” Hendricks explains. “Our findings suggest the protective effects of classic psychedelic use are attributable to genuine reductions in antisocial behavior rather than reflecting improved evasion of arrest. Simply put, the positive effects associated with classic psychedelic use appear to be reliable. Given the cost of criminal behavior, the potential represented by this treatment paradigm is significant.”

THE YOUTH MOVEMENT TO NATURAL MEDICINE, READ ON… 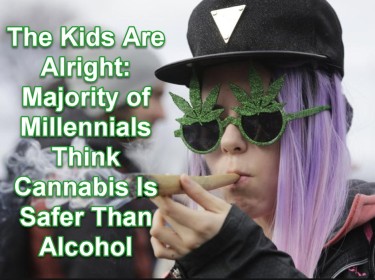 WHY MILLENIALS THINK CANNABIS IS SAFER THAN BOOZE, READ THIS!