The Cannabis vs. Alcohol Tale of the Tape

Unless you’ve been living under a rock for the past two decades – cannabis is popular! Over the past 10 years, the support for full cannabis legalization has only been growing and some of the recent polls suggest that close to 70% of the country is in favor of making marijuana legal.

“Gallup has documented increasing support for legalizing marijuana over more than five decades, with particularly sharp increases occurring in the 2000s and 2010s. In 2013, a majority of Americans, for the first time, supported legalization. As was the case in 2020, solid majorities of U.S. adults in all major subgroups by gender, age, income, and education support legalizing marijuana.”

With this continued support for the legalization of cannabis, we might see the pool of regular users swell slightly – however, as of now there hasn’t been a major influx in “new users”  despite cannabis being legal in several places. This only goes to show that not everyone who supports cannabis legalization are users themselves.

Nonetheless, for those who make the rules there is still the question about the “net effect of cannabis” on society and whether it will have a positive impact or not is always up for debate. Hell, it’s the very reasons why drug laws exist in the first place – The Fear of what unsanctioned drug use has on society.

Of course, we can always look at one drug that is readily accepted by those who would caution us against cannabis legalization – I’m talking about Ethanol baby!

Throughout the rest of this article we’ll take a closer look at the impact of cannabis and the impact of alcohol. Based on this assessment, we can see whether there would be a net-positive or negative based on these conditions.

If cannabis is to be such a “risk” to society, then surely any other drug with higher mortalities and adverse side effects should be scrutinized at the same level as cannabis. In the following article we’ll compare Alcohol and Cannabis and weigh out the risks and benefits of each.

According to the CDC, an estimated 95,000 people (approximately 68,000 men and 27,000 women) die from alcohol-related causes annually, making alcohol the third-leading preventable cause of death in the United States.

Yet despite these horrific side effects of alcohol, it is celebrated and promoted everywhere. Now don’t get me wrong, alcohol companies should be able to peddle their drugs to their user-base even if these side-effects are so horrific.

Don’t think for a second that I’m advocating the prohibition of alcohol. Rather, I’m merely pointing out that a drug that has more causal side-effects than cannabis is currently legal and easily accessible.

Now let us check the yearly cannabis-related deaths and do our comparison.

Despite the low overall chances (virtually impossible) of dying from a weed overdose, some fatalities do occur.

The National Academies of Sciences, Engineering, and Medicine released a book-length examination of the health risks associated with various forms of cannabis. This examination included an in-depth review of the risks for fatal and nonfatal overdoses.

People cannot die from too much cannabis in their system, yet many people have died under the influence of marijuana. Basically, people get too high and do some occasional dumb stuff that gets them killed.

The main psychoactive ingredient in alcoholic beverages is ethanol. Generally referred to as “alcohol,” ethanol is the substance that makes you drunk.

It’s produced by yeasts that digest the sugar in certain carb-rich foods, such as grapes — used to make wine — or grains — used to make beer. Some types of fine red wine are rich in antioxidants and consuming one glass of wine a night will not significantly impact your health and you may even reap some of the benefits.

This isn’t to say you should binge toke for a month, it’s just an example!

The marijuana plant contains more than 100 different cannabinoids. Each one has a different effect on the body. Delta-9-tetrahydrocannabinol (THC) and cannabidiol (CBD) are the main chemicals used in medicine.

There are numerous health benefits of cannabis consumption I can write an entire book about them, but here are the most notable and researched ones:

And the list goes on…It is hard to believe and fully accept that a plant with such health benefits is still frowned upon and illegalized by the majority of governments around the world.

“I have seen many patients with chronic pain, muscle spasms, nausea, anorexia, and other unpleasant symptoms obtain significantly—often remarkable—relief from cannabis medicines, well beyond what had been provided by traditional (usually opiate-based) pain relievers.”

Medical Side Effects of Alcohol Abuse

Alcohol has a long history of destroying the lives of its users,  health risks are numerous and fatal, and the annual death rate alone should tell you the degree of danger it imposes on society. .

As for the long-term risks, this is where things start to get concerning, there is a long list but I’ll be mentioning the most likely to happen:

Medical Side Effects of Cannabis Abuse

While cannabis seems to be overflowing with health benefits, just like any other substance on this earth, its excess can bring a heavy toll on the mind. Some of the medical side effects of cannabis are according to “official sources”

It’s important to note that the vast majority of users will never experience these symptoms, except for when they are stoned. However, the moment you’re sober again – the first three side effects wear off. Respiratory problems are uncommon with chronic cannabis users, however, this doesn’t mean that you should abuse the smoke.

Some of these risks apply for some and seem non-existent to others, due to the diversity of human genetics, each person experiences the same substance differently.

But for the most part,  those who consume cannabis in moderation, never suffer from any of the consequences mentioned.

The correlation between violent crimes and alcohol

Alcohol plays a big role in criminal activities and violence. Excessive drinking can lower inhibitions, impair a person’s judgment and increase the risk of aggressive behaviors.

Because of this, alcohol-related violence and crime rates are on the rise in the U.S. People can say whatever they want, but alcohol’s detriment to society is clear as day.

Roughly 40% of inmates who are incarcerated for violent offenses were under the influence of alcohol during the time of their crime. This is probably because alcohol numbs their critical thinking and allow them to override their sense  of reason when committing heinous crimes.

I know I’d much rather be drunk if I’m about to go murder someone in cold blood. Fortunately, I have no inclination to murdering anyone and therefore my alcohol consumption is virtually non-existent. .

According to the AlcoholRehabGuide organization, some examples of criminal activities associated with excessive alcohol use are:

However, as you can see – many times the crimes related to alcohol are directed towards innocent people. A drunk abuse father and husband, the young thug trying to prove he’s hard, the rapist getting ready to destroy someone’s world.

Alcohol allows the criminal to bypass their critical thinking, their empathy, and engage in a base-emotional state, driven by impulse.

Yet this drug is readily available in every store.

Many of those who abuse alcohol end up eventually abusing themselves and the people closest to them.

When you tell someone that you come from a broken home, the first thing they ask you is if you had an alcoholic parent.

We are at a point where everyone knows that a raging alcoholic can wreak havoc on society, and sadly, his children, spouse, and other close family members and friends are the most at risk.

While there is much debate as to whether alcohol can be a lone trigger in domestic abuse, it cannot be denied that it is statistically more likely to be involved than it isn’t. Two-thirds of victims of spousal abuse report that the perpetrator had been drinking at the time of the incident(s).

All of this is to show just how devastating the misuse of alcohol can be in our society, and the irony that we’ve been witnessing for years, of how alcohol is being pushed and sold everywhere; As long as you’re not driving while drunk, no one can stop you from drinking your life away.

I think all of the scientific facts mentioned above clearly reveal whether or not cannabis is better for people and society, It is such an obvious answer to what used to be a taboo question.  There is no debate, for the many benefits of cannabis overshadow the little risk it may bring when used excessively.

Each year, more people are becoming more aware of the benefits of smoking weed and using cannabis products to enhance their quality of life.

However, this doesn’t mean that alcohol should be pushed back into the black market. We know that even more hazardous than alcohol and any drug on this planet is “drug prohibition”. More people die from drug prohibition each year than all drug overdoses in the world.

Alcohol is “more dangerous” than cannabis, yet at no point should we ever restrict the freedom of a person to get blitzed.

The larger question is whether cannabis will deliver a “net-positive” on society and while this analysis can’t answer that for sure, we know for a fact that it would be more positive than alcohol.

In fact, as more people begin to consume cannabis and reduce their dependence on alcohol, we should already begin to see a “net positive” effect.

The fact of the matter is that we shouldn’t even really be having this debate. We need to acknowledge that drug prohibition is the worst solution for everyone, and everyone loses.

When we mature as a society and accept that drug  use and abuse is a part of our society – we can begin to solve those more “specific” problems than trying to police people’s consumption practices. 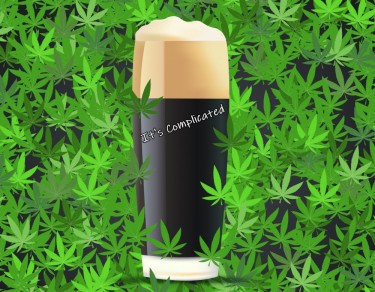 ALCOHOL AND WEED, HOW PERCEPTIONS ARE CHANGING NOW!