The Cannabis Act, which legalized the usage and sales of marijuana for non-medical uses in Canada, went into operation in October 2018. The act contains provisions for home growing of cannabis, permitting a maximum of four cannabis plants to be cultivated per household, with the ability for each territory and province to impose additional limitations as they see fit. For example, Provinces like Manitoba and Quebec forbid planting cannabis in homes for recreational purposes, whereas the other provinces permit the growth of a maximum of four plants. About 10% of Canadians who use marijuana grow their own or have another person do it for them, according to the National Cannabis Survey (NCS) of 2019.

Only a few studies, the majority of which were carried out outside of Canada have looked at the demographic trends of home cultivation. According to this research, men between the ages of 20 and 40 who are working or enrolled in school, reside in rural areas, and regularly use marijuana are the ones who are most probable to engage in marijuana cultivation at home. For personal or shared medical needs, cultivating marijuana at home is most frequently done for this reason. Self-reported advantages of growing marijuana at home include greater control over the quality, lower expenses, and averted exposure to the black market.

According to statistics reported in the journal Addictive Behavior Reports, around 10% of Canadian cannabis consumers in Waterloo, Canada reports practicing home growing of cannabis plant. Canadian research teams investigated home cultivation patterns before and after adult-use marijuana legalization in 2018. Adults in most parts of the country are allowed to cultivate up to four cannabis plants for personal use under the law.

According to the researchers, the number of customers who cultivated their own cannabis plants jumped to nine percent from the six percent recorded before the legalization of cannabis in 2020. Those who lived in more rural locations were far more prone to cultivate their own. The majority of people who participated in home growing did not exceed the plant restrictions of four plants set by law.

According to the authors, about one-tenth of Canadian cannabis users reported home production of cannabis in 2020, with a moderate rise coming after the legalization of recreational cannabis. Home cultivation adoption is related to province and cultivation rules; notably, Manitoba and Quebec, the only jurisdictions that restrict the recreational cultivation of cannabis in homes, recorded among the lowest rates. Although the current study found a rise in home cultivation among the previous 12-month cannabis consumers following legalization, it will be interesting to observe if rates continue to rise even as there is the availability of legitimate cannabis and the price of legalized marijuana falls.

DATA ON THE WHOLE OF THE UNITED STATES

Less than two percent of marijuana consumers in the United States are predicted to grow their own cannabis at home, however, the real number of growers has probably climbed in the last few years as more regions have made marijuana legal.

The addition of legislative measures safeguarding non-commercial home growing of marijuana acts as leverage to ensure the product offered at retail stores is of a high quality, is safe, and is reasonably priced, according to NORML, which has long supported that individuals in legal countries should have the choice to grow small amounts of cannabis at home for personal use. Furthermore, allowing cannabis to be grown in consumers’ homes gives adult users access to a quick source of cannabis, displacing the black market. A source like this is essential because it frequently takes state authorities a good number of months or even years after a law is passed to produce licensed retail outlets.

DANGERS THAT COULD ACCOMPANY HOME GROWING OF CANNABIS

Flame and electrical hazards, unintentional child exposure, and the sale of cannabis grown at home on the black market are just a few of the concerns that can be linked with home products that have been scientifically established. People who grow cannabis at home might be more likely to suffer from marijuana use problems like addiction and other mental health concerns because home cultivation of cannabis for non-medical uses has been linked to increased availability, more potent cannabis (i.e., cannabis with a higher concentration of tetrahydrocannabinol [THC]), and a higher frequency of use. Home growing has, however, received much less research than other cannabis-related dangers, like office use and driving after having used marijuana.

The regularity of use, a key indicator of workplace usage, may increase as a result of easier availability of cannabis due to home cultivation. But a recent study indicated that prohibitions against home cultivation are linked to decreases in fatal occupational accidents. This is possibly due to the fact that workers are permitted to use marijuana instead of other substances like opioids and alcohol, (which are arguably more dangerous for workplace safety) due to the increased accessibility provided by these regulations. And it helps some employees deal with their daily stress and struggles.

According to recent estimates, 25 percent of Canadian employees who use cannabis have done so at work.

In several U.S. regions, once non-medical cannabis usage became legal, rates of driving while impaired by cannabis increased. However, self-reported self-reported statistics of driving after marijuana use have stayed largely stable in Canada since recreational cannabis was made legal, according to a new study based on data from national and provincial population surveys.

According to a U.S. study on home growing laws, there is no difference between areas that permit home growing and those that do not in terms of the probability of driving after using cannabis. However, further study is required to fully comprehend how legalization has affected driving while under the influence of cannabis in Canada. 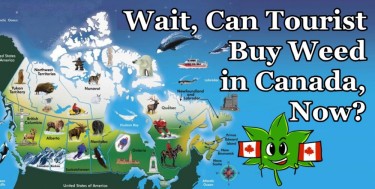 WHAT DOES IT MEAN NOW THAT CANADA HAS LEGAL WEED?