There will come a point in time where Pharma will no longer require cannabis plants to tap into the power of phytocannabinoids. In fact, this would probably be the optimal solution for everyone and will create a distinct difference between “recreational cannabis” and “medicinal cannabis”.

It seems that the people in Israel agrees, who have cloned cannabis cells with 12 times more potency in a bioreactor.

Today, we’re going to dive deep in this emerging technology and what it means for cannabis in the medical field as why it’s probably the best for Pharma to pursue this path.

A company in Israel – BioHarvest Sciences – have successfully cloned hemp cells to grow them into a substance (not the cannabis plant) with all of the active compounds found in cannabis. This includes the minor cannabinoids.

Obviously, the first main two cannabinoids being focused on are THC and CBD, however, if this technology works the way it is intended, it would mean that you would be able to produce more rare cannabinoids at mass in less time and with a lower cost of processing post harvest.

According to the company, they use less water and it takes a lot less time for them to be able to harvest the active compounds.

“We don’t grow the plant at all,” BioHarvest CEO Ilan Sobel told The Times of Israel. Instead, the process involves “replicating” cells taken from a hemp plant in big tanks called bioreactors to produce huge numbers of identical cells.

“We grow them in huge bioreactors in just three weeks — while regular cannabis takes 14 to 23 weeks,” Sobel said. “Our tech can also significantly increase the levels of active ingredients, as a percent of the weight, versus what is found normally in the plant.”
SOURCE: TIMES OF ISRAEL

Three weeks is an amazing feat! As Sobel mentions, to grow cannabis plants you need between three to five months, and this doesn’t include curing. If it can take a company three weeks to harvest copious amounts of cannabinoids, it means that they will be able to create cannabinoid-specific medicines in specific quantities.

They also have far stricter controls over the environment, meaning that they can create conditions that favor one form of development over another. While they are not disclosing all the tech they are using for proprietary reasons – the biopharmaceutical industry might have found a way to finally “patent” their drugs without entering into the “who owns a plant” dispute.

This is one of the reasons why Pharma has been so hesitant to embrace cannabis as a medicine. Since there are no patents on cannabis, considering that it is a plant, anyone can grow it. In fact, you can grow your own cannabis, extract RSO from it, and essentially be treating yourself with cannabis.

However, how this technology changes the approach is;

In other words, they can use the cannabinoids as “materia prima” – meaning they don’t need to grow cannabis plants to produce the materia prima…they can skip this process altogether.

Sobel said: “By adjusting specific conditions to which the cells are exposed, we can create different desired compositions of active ingredients, meaning we can dial up and down the various cannabinoids [compounds].”

The biomass that comes out of the bioreactor consists of cells that are identical to those found in cannabis derived from plants, and there is no genetic modification, Sobel said. Patients can receive it in smokable form or as pills, drops, chewing gum, and a range of other formats. (Source: TIMES OF ISRAEL)

As you can see, this can also have an implication for the recreational market. Specifically, companies that want to create unique infusions. Furthermore, the biomass is still able to produce “smokeable” options, meaning that there is even a market for vapes and “joints”.

Cannabis cultivars are bred in order to promote certain cannabinoids over others, yet, they also produce terpenes, flavonoids, and all those minor cannabinoids within their genetic boundaries. Yet this “free range” type of cannabis has the ability to develop over time.

This might mean that you would be able to “taste” a different between biomass weed and regular cannabis plants. Of course, scientists would also be able to produce terpenes and flavonoids and essentially replicate any cultivar if they get a hold of the cells.

The controlled environment of the bioreactor could overcome two challenges of cannabis farming: contamination and crops with varying levels of active compounds. Sobel said that the protected environment of the bioreactor keeps out contaminants like fungi, and the controlled nature of the method delivers a product that has consistent compound levels.

BioHarvest claims that if its biomass takes off, it will deliver the benefits of medical cannabis more cheaply and with less environmental impact. This is because, according to company calculations, each kilowatt of electricity produces eight times more material from the bioreactor than what is produced from plants. When it comes to water, each gallon produces 54 times more bioreactor material than plant material. Land requirements are reduced by more than 90%.
Source: TIMES OF ISRAEL

As mentioned, this is good for Pharma who would much rather  have controlled environments where they can streamline specific cannabinoids and reduce costs in the process.

“The bottom line is that we can make cannabis and hemp far more useful than before, at lower cost to our planetary resources,” Sober commented. “It is a wellness and sustainability solution from Israel that can provide a truly inspiring contribution to the world.”

While there will be some companies who will prefer to use Biomass cannabis to infuse their products due to the cost benefit, many cannabis users will still prefer cannabis plants. I don’t think that these two sources will ever compete within the recreational market.

However, it does make sense on an industrial scale for BioMass Harvests to become a priority.  Not only are you reducing the “time” involved, you’re also reducing costs associated with water and energy. When the US finally legalizes cannabis, the demand will probably outpace the supply.

When countries like Mexico comes into play, we can expect the country to become a major supplier of hemp and cannabis. However, these Biomass processing plants will probably become the “go to” source for pharma and major industries who rely on large quantities of specific cannabinoids in their products.

Furthermore, considering that it’s “cloned”, it means that you can actually keep a standard – whereas with cannabis plants, there is always a fluctuation when it comes to the potency and consistency in crops.

What I can see happen is that “BioMass Joints” might be an additional product that the recreational market might entertain. People would be willing to smoke a “glob of biomass” that’s been science-d for a specific effect.

However, we won’t know until this technology becomes available for the world. Currently, it’s still in the Research and Development phase, and most probably will first be available for the pharmaceutical industry.

In a few years (or decades), the idea that cannabinoids are sourced from plants for medical purposes will become a thing of the past. It doesn’t make much sense for Pharma to cultivate if they can bypass the process.

This doesn’t mean that they won’t be creating their own cultivars. Instead, I can see how the industry creates special growing facilities where they experiment with cultivars, and when they find one plant that produces the optimal standard for their drugs – they will simply clone it in a bioreactor.

It seems that cannabis breeders will become more important over time.

For those of you who don’t know what a Bioreactor is, don’t worry!

A bioreactor refers to any manufactured device or system that supports a biologically active environment.[1] In one case, a bioreactor is a vessel in which a chemical process is carried out which involves organisms or biochemically active substances derived from such organisms. This process can either be aerobic or anaerobic. These bioreactors are commonly cylindrical, ranging in size from litres to cubic metres, and are often made of stainless steel.[citation needed] It may also refer to a device or system designed to grow cells or tissues in the context of cell culture.[2] These devices are being developed for use in tissue engineering or biochemical/bioprocess engineering. Source Wikipedia

If this is a bit too complicated to understand, one Reddit User simplified it;

Cells cultivated in a bioreactor are undifferentiated. The plant equivalent of stem cells. They are not forming tissues like leaves or branches or flowers, they just replicate over and over like a tumor. It’s controlled plant cancer induced using hormones. Source: Reddit

As we continue to embrace a world of cannabis, we’ll see technology step in to provide solutions for industries that will benefit from mass production of specific cannabinoids.

While I’m still going to be smoking my plants, I would most certainly at least give a “biomass joint” a try if it ever hits the market.

What’s your take on it? 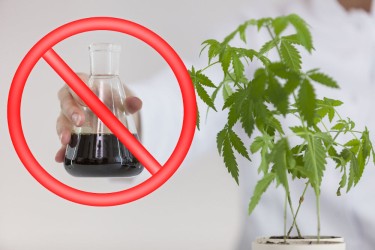