Is the RICO Act a Serious Problem for the Cannabis Industry or Just a Bunch of Smoke?

The cannabis industry has always had to fight and claw for everything it has gotten from the hands of the law. From its present stance before state governments to the numerous open medical and recreational markets. It has always been a struggle and it looks to continue to be as cannabis businesses are now being targeted using the RICO statute. A tactic that was once reserved specifically for the mafia is now being employed against legitimate cannabis businesses. Read on as we explore what this means and how the cannabis industry is likely to react.

For a long time, the threat of charges from Racketeer Influenced and Corrupt Organizations (RICO) Act has been hanging over the heads of cannabis businesses. It now seems more realistic than ever as cases have come up both in Arkansas and California against legitimate cannabis businesses. For those that do not know, the US RICO Act came to be in 1970 when it was designed against high-profile mob bosses. It has since been modified to include a wide range of illegal businesses such as slavery, gambling, racketeering, gambling and other illegal activities.

RICO Lawsuits in California and Arkansas Against Cannabis Businesses

Two California-based cannabis companies were recently faced with a lawsuit regarding the inflation of THC amounts in their products. A similar lawsuit had been filed against four marijuana companies in Arkansas about three months ago and is getting headlines. The suit which is against DreamFields Brands and Med for America accuses them of inflating the THC amounts in their pre-roll products. The lawsuit claims this was specifically done with the aim of attracting more customers and driving profits.

THC is the major cannabinoid that induces euphoric feelings and elevated moods in cannabis products. CBD on the other hand is the major cannabinoid known for promoting calm and relaxation.  This makes them quality determinants in which cannabis products consumers will buy. Products with higher THC amounts are expected to have stronger effects that those with lower amounts. While this might not be entirely true scientifically, it’s the popular belief among users. Therefore, products with higher THC amounts go for higher prices which means higher profits for users.

The Jetter Pre-roll products which are being argued against in the lawsuits were recently reviewed by Weed Weekly to check the amounts of THC present in the products. The review found that the amounts of THC present in the product were considerably lower than what was indicated on the labels of the products. the average product had THC content ranging from 23 percent to 27 percent. It was however indicated on the labels of the products that the range was from 35 percent to 46 percent. Such issues have become common in the cannabis industry as different producers are bowing to pressure. Many consumers believe that the higher the THC amount, the stronger the effects. Though the cannabis effect does not work like that, it remains a big factor driving business in the cannabis industry.

Should Cannabis Businesses Be Worried?

Similar to the case in California, four cannabis firms in Arkansas were faced with similar charges filed on July 12. The plaintiffs are Don Plumlee, Pete Edwards, and Jakie Hanan who argue that the medical marijuana products they acquired were 25% lower than advertised. The lawsuit comes up against Steep Hill Arkansas, Steep Hill, Inc (a marijuana testing service), Bold Team LLC, Osage Creek Cultivation, and Natural State Medicinal. The argument being put forward to consider the case under the federal RICO Act is that large-scale marijuana production is illegal under federal law. However, it is expected that this will not hold water.

The RICO charges against the cannabis firms in Arkansas are quite different from some other types of cases that have been put up against marijuana licensees in the past. Common cases in the marijuana industry have always been brought up by abutters. These abutters tend to use the RICO statute to lay claims for damages concerning loss in property value. Both sets of cases are still known to have low conviction rates against the cannabis businesses. However, they leave considerable damage and so it is best that cannabis businesses toe the line of jurisdiction to avoid them entirely.

Are Cannabis Businesses also using the RICO Act to their advantage?

It would also seem that some cannabis businesses are turning the tables and using RICO charges to go against unlicensed marijuana retailers. Cannabis industry executives in California have filed two such lawsuits under the RICO Act in the past two months. While it is expected that these lawsuits will take years to play out, it spells good news to see the industry using a tool that had been fashioned against them in the past.

The cases are targeted against a local group of businesses and individuals who have instituted and profited off the activities of illegal cannabis dispensaries. This also includes advertising agencies like the alt-weekly newspaper San Diego Reader. The body has been accused of running ads for unlicensed marijuana shops alongside others that support illicit cannabis businesses.

The cannabis industry is garnering attention and it will continue to do so. While it is good that now of the RICO cases have been able to stick so far, cannabis businesses should be careful. Mislabeling products intentionally for increased traffic is bound to cause problems sooner rather than later.

HOW THE CANNABIS INDUSTRY CAN BEAT THE RICO ACT, READ ON… 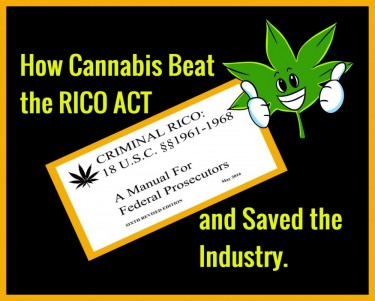