Do You Procrastinate When You Are High?

How to NOT be a Procrastinating Stoner

There’s a lot of negative stereotypes when it comes to weed smokers. Lazy, unproductive, easily distractible – and while this is empirically false there still is some “truth” to it all.

And it’s not necessarily stoners either!

The fact of the matter is that procrastination is something that everyone is dealing with at some level. It doesn’t matter whether you’re stoned or not. Most of us try to do anything other than the thing we need to get done – especially if the task isn’t “enjoyable”.

This is because we’ve been trained like space monkeys to respond to dopamine spikes due to our interaction with our technology. These days, “instant gratification” has made tasks that provide “delayed gratification” seem more difficult to do.

And while cannabis doesn’t make you lazy, unproductive, and easily distractible per se – there is an extra layer of “the fuck its” within your consciousness when you’re under the influence of cannabis.

This is why today I’m going to be giving you some tips on how to deal with procrastination as a stoner and how you can level up your game for 2023.

But first – why should you listen to me?

There was a time in my life when I was led to believe that I was lazy. This was prior to smoking weed. I’d frequently hear, “Yea, he’s very intelligent but also very lazy…” of which I typically mumbled – “It’s not that I’m lazy…it’s because your shit is boring!”

These declarations from adults in my childhood made me believe that perhaps – “I was lazy!”

For years, this plagued me and despite the fact that I’m a “high achieving individual”, in the sense that when I enjoyed doing something – I over achieved!

For example, while I may write a shoddy essay for a teacher on a subject I had no interest in, I could write volumes of intricate storyline on games I was developing, or books I was writing for fun.

As I grew older, I came to understand that it’s not that I’m lazy – “It’s because I have no interest in the tasks” and therefore my attention is easily diverted from the difficult task.

There are a few approaches one could take when dealing with this issue. First, you could ONLY do tasks that you enjoy. However, in life there are a great number of tasks you “won’t enjoy” but which are absolutely necessary.

For example, if you want to gain muscle – you need to go to the gym. You need to work out. Sweat, get sore muscles, maybe even hurt yourself a bit. You will endure pain, and will be challenged to push yourself “beyond your current self” in order to attain the muscle mass you desire.

Within this process, many “non-enjoyable moments” are critical to your success. Therefore, only doing things you like is not a viable option.

The other way is to simply force yourself to do them anyhow. This is what most successful people do. They just do it anyway!

While it sounds easy, it isn’t and these people exude tremendous willpower. However, when you look at most “high functioning execs”, they are either drinking themselves or smoking themselves to death. When you “force yourself” to do things you don’t like – you may begin to notice some advancement in your life objectives…however, if you don’t learn to be gentle with the self you might also find yourself becoming something you don’t like at all.

An over worked, unhappy, stressed out individual that needs drugs, sex, alcohol, and other kinks to get them through their days.

Which is why you need to learn how to push yourself without scolding yourself.

You don’t need to “scold the monkey”, you simply need to direct it with care and listen to it when it speaks!

I find that when you personify a concept, it becomes easier to understand. The “Monkey” is the personification of your mind when it’s being challenged with something it doesn’t want to do. The monkey will tug at you and say, “Dude, have you seen this Youtube video…” or “Just one more and then you’ll get back to work…”

When you give into the monkey, you might find yourself in a state of perpetual pleasure seeking, which then after a while leaves you empty and drained. Self-Loathing typically follows suit.

When you’re high, the monkey can be louder still and find things that actually is “something that adds value to your life”, but isn’t necessarily the MOST IMPORTANT thing you need to do in that moment.

What this does is creates problems in the future that you could solve in the present, but since you procrastinated, it piles up since “TIME NEVER STOPS MOVING!”

What you leave for tomorrow is “Today + Tomorrows Load” and in turn, the weight of “Tomorrow’s load” is significantly more than today’s – and requires an even greater assertion of effort.

So what do you do?

How to Train your Monkey (even while stoned)

In the beginning, I tried everything in my power to stop the monkey. I would force myself to do the things I hate. But eventually, I started hating the things I did.

Eventually I learned that when the Monkey beckons and demands my attention – I sort of give it to it, but I don’t do what it wants me to do!

I don’t have any personal interest in this topic, but I have a deadline and it’s money in the pocket to pay for some other over-inflated item on the shelves. You know, since Cheese costs $1000 per slice these days!

As I am about to write, the Monkey is like, “Dude, you’re stoned…why waste it? Why not instead, you work on that thing you’ve been wanting to work for the entire time, but don’t ever have time for it…what if that time is now?”

Now, I know if I ignore this, I’ll be constantly getting distracted, or I may even get physically or mentally tired as a result.

Therefore, instead of ignoring it flat out – I stand up, and do five or six sun salutations.

I take in a deep breath, focus my mind back to the body, get the blood pumping, stretch out my sore muscles, and take a minute to just clear my mind.

You see, the monkey isn’t really there to distract me as much as letting me know that it’s time you do something else – you’ve been sitting on your ass for hours and your body needs a break.

However, instead of doing the thing that my mind wants to do, I do something else that benefits the body/mind.

You could literally take a power nap, meditate for 10 minutes, go for a walk, do 30 push ups…whatever. As long as it’s not the thing that your mind wants you to do.

The Monkey gets stimulated either way, except in this way, you’re actually replacing a “bad thing” with a “good thing”. You increase focus, you increase energy, and at the end of it – you’ll be ready to do the thing you don’t want to do.

You’ll get to a point where you’ll say, “Enough of the bullshit – let’s do this!”

It works even if you’re stoned!

Smoking marijuana doesn’t really impact your performance, it simply enhances the traits you already have. If you’re a loser smoking weed, you’re probably one not smoking it either.

If “weed” is your excuse for “not doing” – then quit or learn how to get shit done even if you smoke weed.

I just taught you a major life hack – the question is, will you use it or not. That’s entirely up to you! 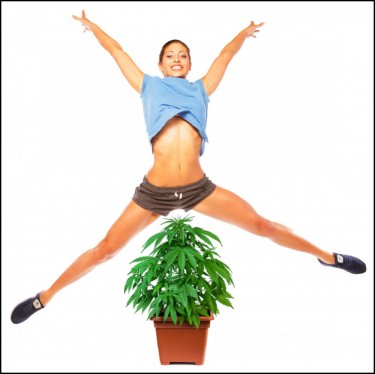 THE LAZY STONER MYTH IS DEAD ACCORDING TO A NEW STUDY!

How to Pass a Saliva Drug Test