Why Cannabis Is Your Best Friend for a Dry January

The holidays are a season of getting together and celebrating with loved ones.

Oftentimes, it usually involves alcohol. Drinking alcohol for several days is a common occurrence among many families and groups during the last few weeks of December, together with indulging in delicious food. It has simply become ingrained in our culture to celebrate the holidays this way. Unfortunately, it leaves many of us feeling exhausted, ill, and dehydrated.

In the long run, excessive booze consumption and binge drinking can lead to serious health problems, especially those affecting the liver. Since the liver is the organ responsible for metabolizing alcohol and detoxifying it from the body, too much booze can cause liver disease.

The ethanol or ethyl alcohol content in alcohol is extremely dangerous for humans to consume, especially in large amounts. In fact, ethanol is actually found in chemical solvents, gas, nail polish remover, and varnishes. This same compound is responsible for getting you drunk and even causing you to have blackouts. In addition, it’s the same compound that damages the liver.

To get a break from all the holiday drinking and give the liver a rest, many participate in Dry January, a month of sobriety; it’s also the perfect time for resolutions and breaking old habits. If you are concerned about drinking too much booze this holiday season, Dry January may be the answer.

And cannabis may be a great companion for that.

A new study has just been released, showing that cannabis use may be beneficial in reducing the liver damage that has been incurred by excessive booze consumption. The cannabinoids in marijuana were found to be beneficial in mitigating liver toxicity due to ethanol, which is the active chemical compound in alcohol. The researchers utilized animal models for the study; the mice were divided into seven, then treated with varying concentrations of cannabinoids and ethanol.

Another study from China revealed that CBD is beneficial for protecting the liver against damage from alcohol. The study, which were published in the medical journal, Free Radical Biology and Medicine, was initiated to help researchers understand if cannabidiol plays a role in protecting the liver from fatty build up due to booze, a condition known as alcohol-induced steatosis.

In 2018, a study of 320,000 people with alcohol-use disorder was conducted, to see if cannabis consumption had any impact on their health. Out of the cohort, 26,000 were categorized as non-dependent while 4,300 were considered dependent cannabis users. Researchers found out that whether the individual was a regular or non-regular cannabis user was not affected by the fact that marijuana consumption helped protect from the four stages involved in liver disease. They also found that the heaviest cannabis were protected from alcoholic liver disease.

The researchers concluded that cannabis can protect the liver because it can prevent cirrhosis, which is a different course of action from stopping the cancer directly. However, this is still significant since a majority of hepatocellular carcinoma cases arise from cirrhosis, so the ability of cannabinoids to prevent it demonstrates its therapeutic potential in preventing the conditions from becoming life-threatening.

There is significant research that cannabis consumption is associated with a decreased risk in alcohol-related liver problems. However, keep in mind that cannabis is not a cure-all: binge-drinking is still dangerous no matter which way you put it.

The occasional glass of red wine actually has positive effects on the body. But hard liquor does not. A glass or two of red wine can relax you, and there’s nothing wrong with that. But if you find yourself wanting a third, fourth, fifth glass of wine, it might be time to reevaluate your health.

You may even want to consider replacing alcohol with weed completely. There is a fantastic range of cannabis-infused beverages out there, making it a fantastic replacement that you can drink without the harmful effects. Alternatively, you can choose to consume in a number of different ways such as edibles, oils, and vapes.

Dry January is a cultural tradition that can be made more bearable – and healthy – with the use of cannabis. It’s the ideal substitute for alcohol, making those days that you feel you need to reach for a drink, much more tolerable. You can enjoy and unwind without the hangover and dangerous long-term effects. The holidays are a time of over-consumption, not just of alcohol, but even junk food and unhealthy dishes. Without a proper detox, these toxins can accumulate in the body and cause harm, so why not give dry January a try with cannabis instead?

CALIFORNIA SOBER, WHAT IS IT? READ ON… 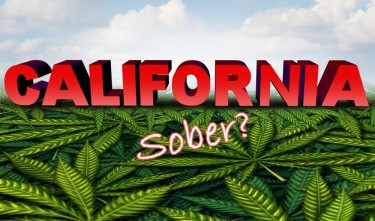 CALIFORNIA SOBER, WHAT IS IT AND HOW DOES IT WORK?

How to Grow Cannabis On a Small Budget

All of 2022's Cannabis Cup winners and where to buy them