It’s been ten years since Washington State legalized recreational cannabis yet the financial institution of the cannabis industry has not developed since then. This shortcoming in terms of banking services has placed retailers of weed shops at the mercy of robbers with too much cash in their hands. Some have even gone as far as characterising them as sitting ducks and the present trends suggest that is the case.

How bad is the issue of armed robberies of weed shops in WA State? Can anything be done to make the situation better immediately? What is the fate of weed shop owners in the state heading into 2023? Read on as we try to provide answers to these questions and much more.

Cannabis dispensaries across different states are known to suffer from several issues. Some of these stem from a lack of logistics and other operational facilities that are readily available to other businesses. The impact of this is that the cannabis industry and its stakeholders will have to suffer some ills that other businesses will be more protected against. One of such ills is the recurring threat of robberies and violent crime that is severely plaguing weed shops in Washington.

The lack of banking services for cannabis businesses means that the industry is restricted to cash-only operations. This means that cannabis dispensaries are likely to have vast stores of cash on-site, a piece of information that is well-known to all and sundry. The implication is that licensed cannabis businesses are all but sitting ducks for armed robbers to pick from.

A tracker run by Uncle Ike who is a member of Washington’s Craft Cannabis Coalition paints a good picture of how dire the situation has been so far. Uncle Ike’s tracker shows that in 2022 alone, a minimum of 100 armed robberies occurred in licensed cannabis retail stores in Washington. This statistic is worrisome when you consider that it is the highest in the past ten years. What it shows is that the burgeoning sales being experienced by the cannabis industry in the state are being noticed by the negative elements of society. This is spurring them to continue to mount repeated attacks on weed shops in the state.

These robberies are actively taking a lot from the cannabis industry in the state both in terms of finances and others. The robberies have since grown violent as the first robbery that resorted in the killing was recorded this year at a Tacoma cannabis store back in March. The robberies have been incessant in the Seattle area and the cities of Tacoma and Bellevue where cannabis stores are being ravaged regularly. The reports from the tracker are in tandem with the data from the Bellevue Police Department on armed robberies in weed shops in the area.

For those that are not aware, the cannabis industry and the retail shops operating within it do not have access to banking services. This is because cannabis is still classified as a Schedule 1 drug which makes the majority of the activities carried out within the market illegal federally. This means that they have no access to bank loans, capital, and other regular banking services. This has since created a situation where the industry is mainly cash-dependent and has since led to the issue of repeated robbery attacks.

The matter is so surreal that Adán Espino, executive director of Craft Cannabis Coalition believes that it could be said that there’s probably more cash at cannabis stores than at banks. This has made the weed shops an active target for repeated robbery cases in the State. The robberies have not been limited to cash only as growers have also been victims within the state. This points to the activities of persons in the grey market who are still looking to continue their illicit activities within the state.

Weed shops in the state are making the best of the situation by beefing up security to help them deal with the looming threat. While this might not to entirely pleasing to provide the decided atmosphere around the business for intending customers, it is a necessary measure. Customers will have to get used to increased security personnel around weed shops for a while pending the time banks can service them.

The Liquor and Cannabis Board in Washington State have seen the recurrent trend of robberies and recently weighed in on the matter. The body held a roundtable discussion with stakeholders in the industry to see how the trend can be curbed and downsized. A product of this meeting is the series of crime prevention training sessions held with licensees and law enforcement agencies. A security firm was also contacted by the board to provide free on-site security assessment to licensees while exploring other cashless options that can be utilized.

The SAFE Banking Act is proposed to curtail all these issues of a cash-dependent economy once it can be passed in the Senate. The regulation will protect banks who wish to offer their services to licensed marijuana businesses from the claws of federal regulators. Though the bill has passed through the U.S. House multiple times, it is yet to get the much-needed bipartisan support needed to pass the Senate. Once that is achieved, we can say goodbye to the days of incessant robbery attacks on weed shops across Washington and the country at large.

ARMED ROBBERIES IN WEED, READ ON… 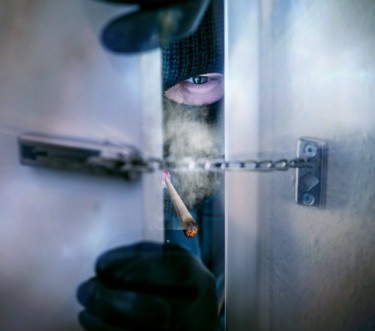